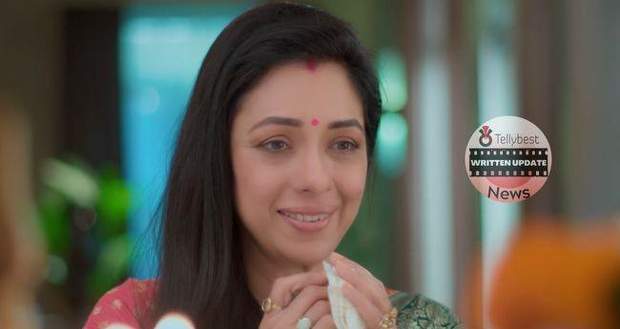 With intact preparations, the Kapadias are set to celebrate Janmashtmi.

Ankush and Barkha get to know that Anupama has called people from the office too, to which Barkha only satisfactorily says that it is good since they have to work under them later.

Anupama brings Anuj in his wheelchair and the festival commences with flowers and happiness.

Anupama dances beautifully and flawlessly for Anuj on “mohe panghat pe” and Anuj’s eyes decipher affection for her.

Later, a document falls off Ankush’s pocket and Anupama finds it.

She is about to look into it when suddenly Barkha snatches it away from her.

Anupama realizes Barkha and Ankush are up to something.

The pooja starts in the Kapadias and simultaneously at the Shah’s.

Vanraj starts thinking of visiting Anuj, therefore, he comes out but Pakhi sees him and thus she accompanies him.

In the Kapadia mansion, as they all are praying to lord Krishna they hear a sorry and look back only to find Vanraj apologizing to Anuj beside him.

In the meantime, Pakhi also comes in and so does Rakhi.

Adhik thinks that Pakhi is really dumb to bring Vanraj today but is satisfied since it would be fun for Barkha.

Rakhi tells them that she was coming to meet the Shahs directly from Singapore but saw Vanraj and Pakhi going away so she followed and came to the Kapadia mansion.

Rakhi says that the Shahs always create drama so she wanted to see what they have for her.

Suddenly Leela, Kavya, and Hasmukh barge in to take Vanraj, and Barkha begins taunting them for always finding a reason to come into their house.

She does not listen to statements of defense from Kavya, Hasmukh, or Leela.

Following this, Barkha taunts Vanraj that he plays a very good victim card.

Anupama tries to stop her because she did not want Janmashtmi to be more havoc than this but Barkha shuts her up by accusing her that her love for Anuj is fake and Anuj is the one who actually loves Anupama not her.

Anupama is shattered by the blame and warns her to stop but this does not stop Barkha instead she states that they do not trust Anupama for Anuj and neither for the business.

This hurts Anupama and tears build up in her eyes.

During the scene unfolding, Anuj's eyes and lips twitch with a few finger movements as if he wants to protect Anupama but nobody takes notice.

Barkha takes the document from Ankush and hands it over to Anupama.

Ankush says that the document is in Hindi so she can understand.

He further continues that it is good the Shahs are here so everything will happen before everyone.

Anupama is shocked by the document and Barkha evilly smiles.