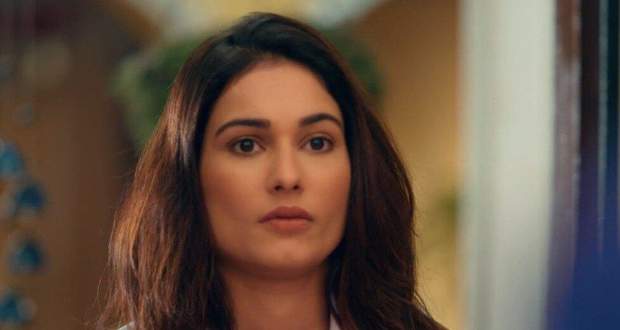 Today's Anupama 23 December 2021 episode starts with Malvika asking Anupama what she wants to eat and proceeding to cook something for both Anuj and her.
Anupama smiles at Anuj and Malvika’s heartwarming interaction and leaves from the kitchen to give them space.
Anuj comes after her and tells her not to feel sad by any words or actions of Malvika as she is a bit of the hasty type.
Meanwhile, Kavya continuously exercises and gets a cramp in her leg, Leela sees and comes to inspect the matter.
Kavya asks Leela how the skin and hair of Anupama and Leela are so good even after aging so much, Leela laughs and tells her that she understands what Kavya is feeling.
Leela elaborates that love is not about beauty and wealth, it is a matter of heart, as long as, she can keep her heart beautiful and young, she will remain beautiful no matter how aged she becomes.
Kavya understands a bit but still feels insecure about Malvika’s young age.
Later, at the breakfast table, Vanraj proposes Kavya look after the café which she refuses. Toshu asks if he can manage the café from now on and Vanraj gladly agrees.
However, Kavya tries to insult Toshu but gets insulted herself.
Toshu and Kinjal arrive at the café welcomed by Samar and Nandini, and Toshu earns his first income.
On the other hand, while eating Malvika’s pancakes Anuj mentions Anupama’s pancakes making Malvika furious.
Anuj apologizes repeatedly to her but she continues to throw and break things going on a rampage.
She tells Anuj that he was like this during Akshay’s time too, she loved him but Anuj drove him away from her as he didn’t like him.
She further tells him that she is not feeling like a family after returning.
Despite Anuj trying to stop Malvika, she leaves the house in anger with Anuj following her.
Anupama handles Anuj, who was going crazy while finding Malvika, and tells him that they will find her together.

Upcoming Anupama episode updates: Malvika asks Leela for permission to stay at their house, Anupama asks Anuj who Akshay is.

© Copyright tellybest.com, 2020, 2021. All Rights Reserved. Unauthorized use and/or duplication of any material from tellybest.com without written permission is strictly prohibited.
Cached Saved on: Wednesday 19th of January 2022 02:18:20 PM