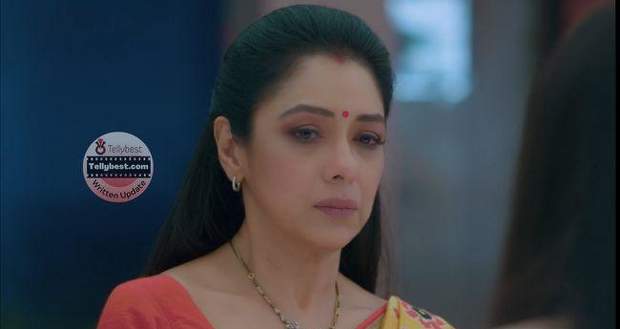 Today's Anupama 23rd December 2022 episode starts with Leela telling Hasmukh that they should have called Anupama from the start to handle Pakhi as she is the only one who can make things right.

Hasmukh taunts Leela that she would call Anupama instead of the fire brigade if she gets stuck in a fire.

Vanraj and Kavya inform Leela and Hasmukh that they have a job offer from Delhi and must leave.

As Leela hears they might have to shift to Delhi, she objects to the job offer but gets silent as Vanraj says he cannot sit unemployed anymore.

Hasmukh asks Vanraj and Kavya to go to Delhi for the job offer and assures them that they should chase their dreams without any barriers.

Kinjal also informs that she has to attend a meeting in Mumbai and says that she will leave Pari with Rakhi.

Leela asks Kinjal to leave Pari with them as she can handle a child very well.

Kinjal agrees but asks Leela to call Anupama if anything is needed as she knows everything about Pari.

Meanwhile, Adhik makes it clear that he does not want to divorce Pakhi and wants to save their marriage.

Anuj and Anupama appreciate Adhik’s decision and ask him to take his decisions after thorough thinking.

Dimple proposes to live with Pakhi so that she does not have to live alone which lights up Anuj and Anupama.

Anuj says that others can also help Pakhi directed at Anupama which makes her silent.

Later, at night, Leela expresses her worry about being left alone by themselves in old age.

Hasmukh says they will eventually have to adjust by themselves as their children will not be together their whole lives.

With teary eyes, Hasmukh says that they should be happy with their children’s happiness.

Toshu comes in a hurry and tells Hasmukh and Leela that something has happened to Pari.

Anuj receives a call from Hasmukh in the middle of the night asking him to bring Anupama urgently as Pari is not well.

Leela tries to pacify Pari but fails when Anupama comes and takes over Leela making everyone relieved.

Anuj also comes with Anupama and checks on Pari but continues to notice Anupama yawning and getting sleepy due to tiredness.

In the meantime, Anu sees a bad dream and comes to Anupama-Anuj’s room to find them but gets scared when she sees no one present.

Screaming Anupama-Anuj’s name in the living room, Anu lies on the floor while crying.

Barkha, Ankush, Adhik, and Dimple try to make Anu stop crying but she continues to ask for Anupama and Anuj.

Adhik calls Anuj and informs him that Anu is crying and screaming violently and that they need to come there as soon as possible.

Anuj and Anupama proceed to leave but Leela stops them and says that Anupama cannot leave Pari or take her with them.

Anuj asks Anupama to stay there and leaves alone while Anupama feels terrible about not being able to aid Anu.

As Anuj reaches home, Anu hugs him and asks why Anupama did not come with him.

Anuj explains that Anupama had to leave as Pari is sick but Anu says that Pari has her mother with her.

Anu says that Anupama left her alone again and asks Anuj if Anupama is not her real mother.

Anuj decides to do something about the situation as he does not want Anu to lose her childhood like that.

© Copyright tellybest.com, 2022, 2023. All Rights Reserved. Unauthorized use and/or duplication of any material from tellybest.com without written permission is strictly prohibited.
Cached Saved on: Wednesday 25th of January 2023 08:56:38 AMCached Disp on: Sunday 5th of February 2023 02:38:06 AM