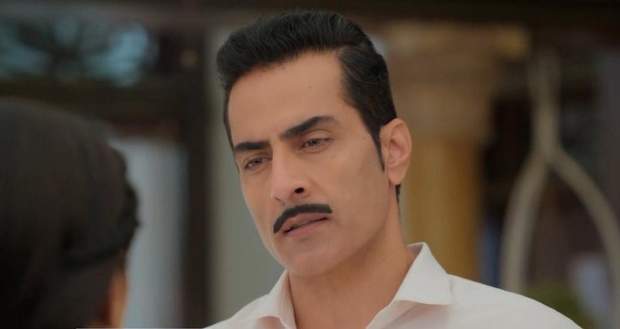 Today's Anupama 23rd February 2022 episode starts with Anupama comforting Nandini and telling her that loving herself is not wrong.

Nandini leaves while Samar hugs Anupama tightly taking support of her shoulders to release his emotional turmoil and decides to never love again.

After that scene, Toshu enters his bedroom where Kinjal was taking a rest, and asks her why she is still grumpy with him.

Kinjal tells him that she is just feeling low and both again come on the same track of argument about Toshu ignoring Kinjal for his work.

But Kinjal stops midway and tries to talk calmly with Toshu about talking with her a bit when a call interrupts their conversation making Toshu leave from there.

Meanwhile, Anupama does puja and gets joined by Anuj, both sing a song and do aarti together.

Anuj tells God that a new thing has arisen in his heart and he wants to tell Anupama as soon as possible.

In the relay of conversation, it gets decided that Anuj will go to buy vegetables but Anupama disapproves of it as she thinks he will not be able to do it.

Anuj challenges bringing the best vegetables and leaves the house.

At the same time, Hasmukh asks both Samar and Kinjal to share their problems with him.

Samar tells him how he is struggling to move on but Kinjal refuses to disclose the matter and leaves after apologizing.

Later, Anuj comes back home with enormous amounts of vegetables seeing which Anupama scolds him drastically.

Anuj tells Anupama how her scolding makes him feel like a husband, both get awkward and steal glances at each other.

On the other hand, after getting opposed by Malvika in business, Vanraj commands Toshu to publish the news of Anuj leaving the Kapadia group in every newspaper.