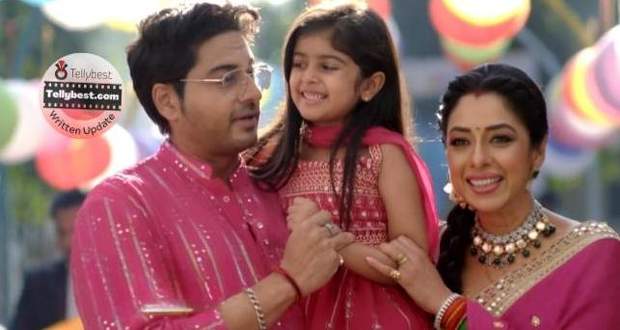 Today's Anupama 23rd January 2023 episode starts with Anupama, Anuj, and Anu dancing together on the stage at Anu’s request and making the audience awe by Anu’s cuteness.

Leela says that everything is a show and Anupama is doing that to make them jealous.

The performance ends and the host compliments the three’s chemistry and asks them what the secret is.

Anuj and Anupama reply that the secret is always love and dancing with family always leads to dancing by heart.

The host gifts a kite of “Perfect Family” to Anuj, Anupama, and Anu and they come back to their seats.

The host announces that they will start the kite competition soon but before that, there is a surprise for all the audience present at the event.

Anu gets upset that Maaya did not come to meet her but Anuj and Anupama lift up her mood by saying that Maaya will eventually arrive.

While passing by, Anupama and Anuj spot Samar trying to comfort Dimple after whatever Leela said to her.

Anupama comes to Samar and Dimple and tells them that she will not lecture them as they are intelligent enough but asks them not to be impolite to elders in their anger.

Vanraj calls Kavya and asks her where she is, but Kavya says she is busy now and hangs up the phone.

While strolling at the event, Vanraj spots another man fighting with Toshu and comes to stop them.

The man says that he is Toshu’s friend and lent him his car as Toshu told him he must take his grandfather to the hospital.

The man further complains that Toshu has put scratch marks on his car but Toshu denies accepting the accusation.

Vanraj gives back the man his car key and tells Toshu that from now on his office, business, and this fake setup is banned.

Meanwhile, Adhik comes to Barkha and asks her if she is fighting with Ankush to which Barkha replies that they frequently argue with each other.

Barkha says that Adhik easily forgave Pakhi and now has become her henchman but gets silent when Adhik says that he is very happy now.

Adhik says that he is trying to improve himself every day and no one is perfect while Barkha asks him to stay away from the Shahs.

Later, the event again resumes and the host announces that the world-famous brand Sweetdrift is launching its fragrance range in India and its product launch will be done there.

Kavya appears as the model introducing the product making everyone cheer for her except Vanraj and Leela.

Kavya goes around the audience making everyone smell the fragrances while Leela asks Vanraj to do something about Kavya soon.

As Kavya comes to Leela’s table, she notices that Leela does not talk to her but does not mind her and moves on.

The kite competition starts with everyone picking their kites and getting ready to fly them.

Leela says that she will cut everyone’s kites today but Hasmukh stops her from being so negative.

Toshu comes to write his name along with Kinjal and Pari but Kinjal does not allow him to do so.

Pakhi and Adhik write their names with a heart and say that they will fly their love together.

Samar comes to Dimple after making the same heart on his kite and gets happy when she accepts it to fly together.

Anupama and Anuj cheer up Anu by writing their names on their kite while Maaya says that she is coming to meet them soon.