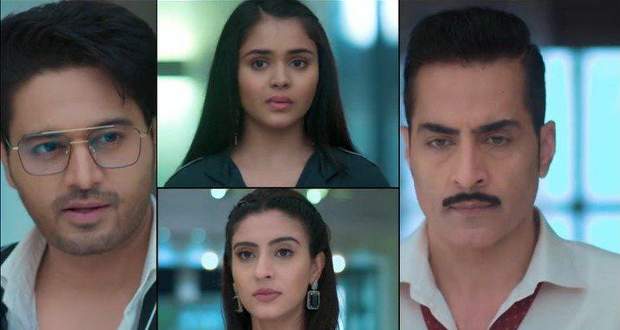 Today's Anupama 23rd July 2022 episode starts with Barkha telling Anupama that both her daughter have gotten the gift.

Barkha tells Anupama that she has invited Pakhi because she feels like meeting with her.

Anupama tells Barkha that Pakhi’s gift is way too expensive and that Pakhi cannot accept it.

Pakhi argues with Anupama for accepting expensive gifts from Anuj.

Anupama puts Pakhi in her place and tells her to become self-sufficient first like her.

She tells Pakhi that she and Anuj are in a relationship while she is not so close in relation to Barkha to accept such an expensive gift from her.

Anupama also reminds Pakhi of her values before accepting valuable gifts from anyone.

Meanwhile, Kinjal is praising Leela for helping her relax.

Just then, Kavya comes to them and requests Leela to do the same for her.

Kinjal talks to Kavya about Anupama sending her some oil and her valuable advice which makes Leela resent Anupama.

Barkha tells Anupama to not scold Pakhi and compares Choti Anu with her saying why can she not get all the luxuries like Choti Anu.

She invites Pakhi to come to live with them if she like.

Pakhi asks Anupama if she can live here as well because she likes this place a lot.

After a while, Leela tells Vanraj that despite her efforts Kinjal only speaks Anupama.

Vanraj tells Leela to not take Kinjal's closeness with Anupama at heart as she has always had a special bond with her.

On being asked, Vanraj tells Kavya that he is going to pick Pakhi.

On the other hand, Pakhi tells Anupama that she is favouring her new daughter over the old one.

Anupama scolds Pakhi for being childish and tells her that Vanraj will not appreciate her living here.

Just then Anuj and Ankush come home bearing an expensive gift for Anu.

Pakhi looks at Anupama sarcastically while Anupama takes Anuj to task for bringing an expensive gift for a daughter which was unnecessary.

Anuj tells Anupama that he understands what she is implying and will be careful in future.

Meanwhile, Vanraj is waiting for Pakhi when the guard tells him that she has been gone a long time.

On the other hand, Pakhi asks Anuj if she can stay with them.

Anuj tells her that she can stay as long as she wants but cannot give her permission unless Vanraj is ok with it.

© Copyright tellybest.com, 2022, 2023. All Rights Reserved. Unauthorized use and/or duplication of any material from tellybest.com without written permission is strictly prohibited.
Cached Saved on: Wednesday 25th of January 2023 01:45:12 PMCached Disp on: Thursday 9th of February 2023 08:32:41 AM