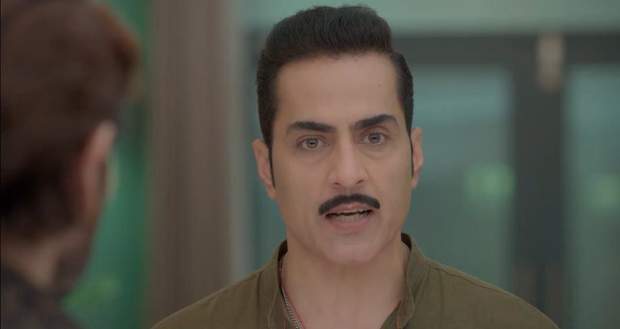 Today's Anupama 23rd June 2022 episode starts with Anuj saying he doesn’t want anyone else to talk to Anupama like Vanraj did today, so he requests her to stay away from the Shah family for a few days.

Meanwhile, Pakhi and Vanraj’s fight continues and Leela comes into the room confused.

Vanraj explains to Leela what happened today which shocks her.

Pakhi is adamant about going back to Anupama’s house even if she has to go against Vanraj’s will and she storms into her room.

Anupama argues that Kinjal needs her right now, but Anuj reminds her how Vanraj is exploiting her good nature in all of this.

He is upset and asks why Anupama is constantly defending her ex-husband, which she denies doing.

Wanting to separate her from her toxic past, Anuj constantly tries to convince her to not see the Shah family again for a while.

He hugs her and tells Anupama that he wants her to be strong and stop apologising and exits the room.

Lying on his bed, he is thinking out loud about how Anupama always sees the best in the worst people.

Defending Anuj, Barkha says that the Shah family does not care about Anupama’s love and nobody there questions Vanraj’s actions.

Adhik is proud of how Barkha is taking advantage of the situation for herself.

Anupama is out of words and walks out of the room crying.

Ankush scolds Barkha that there was no need to interfere in Anupama and Anuj’s personal matters.

Sara takes his side and says that Vanraj’s reaction is not unjustified, because their family is the one giving them reasons to be angry.

Anuj is lying in his room when Anupama walks in and they both find it difficult to speak to each other.

Anuj requests Anupama to not let this argument come in between their love.

Anupama understands that what Anuj said was out of love and care for Anupama.

Kavya reminds Pakhi that Vanraj loves her and she can fix matters between them by apologising.

Pakhi denies saying that Vanraj is jealous of Anupama’s new wealth, which is why he reacted like that but Kavya disagrees.

Kavya tells her to get some rest.

As she walks out, Pakhi receives a text from Adhik asking her if she can talk to him.

© Copyright tellybest.com, 2022, 2023. All Rights Reserved. Unauthorized use and/or duplication of any material from tellybest.com without written permission is strictly prohibited.
Cached Saved on: Monday 21st of November 2022 08:41:49 AMCached Disp on: Monday 5th of December 2022 02:29:42 PM