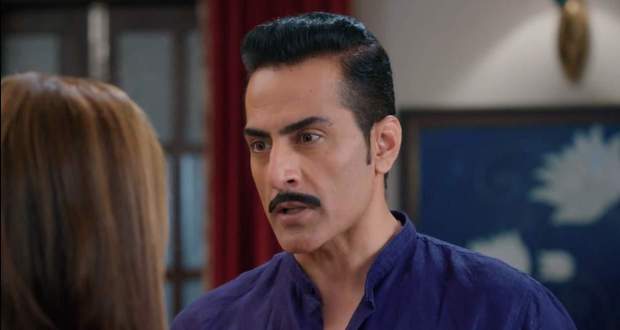 Today's Anupama 23rd March 2022 episode starts with Anuj shedding tears thinking about separating from Anupama while Anupama goes back and forth on her decision to call Anuj.

Anupama remembers her behavior with Anuj and says sorry to him in her heart for hurting his feelings.

She decides to announce her final decision regarding marriage in front of everyone the next day.

Meanwhile, Anuj gets a call from someone and gets irked on hearing the news from them.

The next day arrives, Hasmukh searches for Anupama but gets informed about her leaving through Vanraj.

Seeing Leela and Vanraj, Hasmukh warns them not to come in the way of Anupama’s happiness, or else they have to face him.

Meanwhile, Anuj finishes his meeting early and rushes to his car to drive to the dance competition venue.

At the rehearsal room, Anupama continuously thinks of Anuj’s words when Hasmukh, Samar, and Kinjal appear.

They wish Anupama the best of luck and leave from there with Anupama wondering about Anuj’s whereabouts.

Vanraj and Leela come and mock Anupama’s dance competition as a mere joke but get shunned by Devika, who visits after a long time.

Later, Jignesh comes to meet Anupama and hears about her problem in contacting Anuj.

Even though he tries to call Anuj, his number seems to be unreachable.

At Hasmukh’s request, Samar calls Anuj to know where he is and asks him to reach there by 1 hour as Anupama’s performance will start by then.

Anupama gets uneasy thinking about Anuj and suddenly slips from her chair with the red paint getting spilled on the table.

At the same time, Anuj loses control of the brakes and crashes into a truck.

Anupama gets sure that something is wrong with Anuj and mumbles his name continuously going into shock.