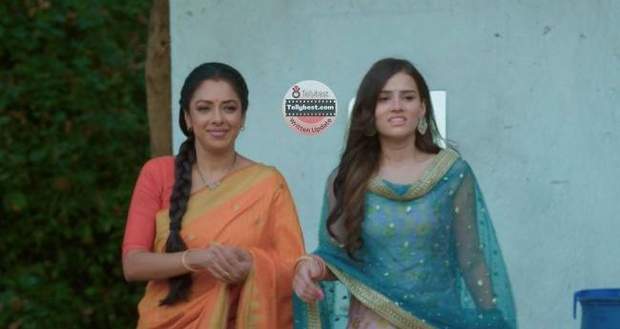 Today's Anupama 23rd November 2022 episode starts with Anupama and Anuj lying on the ground after getting hit by those molesters.

Anupama somehow manages to regain her senses and crawls toward Anuj to wake him up from his unconscious state.

After Anupama desperately calls for Anuj a few times, Anuj’s eyes open and he instantly hugs Anupama while she cries.

Anuj asks Anupama if she is all right and checks on her wounds as he sits up, thumping in pain.

Suddenly, Anupama remembers the events prior to getting hit and asks Anuj about Nirmit and Dimple.

Anuj also regains his senses and checks on Nirmit who lies in the car seat in an injured state.

Seeing that Nirmit is not waking up, Anuj and Anupama search for Dimple by calling out her name and find her shoes, bag, and accessories lying on the road.

Anupama sees something in the forest at the side of the road and walks toward it while Anuj calls the police.

As Anupama comes into the forest, her eyes become wide with horror seeing Dimple lying there in a devastating state.

Anupama screams in terror while Anuj averts himself in the opposite on seeing the situation in front of him.

Meanwhile, the Shah family spots Vanraj taking food for Pakhi and stops him as they do not want him to spoil her.

Leela tells Vanraj that he has to let Pakhi handle her household on her own so that she does not take them for granted.

Vanraj says he is just taking two French toasts which is not that much of a deal.

Still, Kavya and Leela ask Vanraj not to do so as Pakhi needs to understand her responsibilities and act upon them.

Leela snatches the food from Vanraj and announces that no food will go from their house for Pakhi.

At the same time, Anuj and Anupama talk with the police after admitting both Nirmit and Dimple to the hospital.

Anupama gets shaken up as she recalls the image of Dimple in front of her and feels helpless not being able to do anything.

Anuj tries to comfort Anupama while she asks how one person can do such a thing to a woman as that one incident shatters the entire life of that woman.

As Anuj assures Anupama that those monsters will receive their punishment, Anupama asks him how Dimple will feel after she wakes up.

The doctor comes and informs Anuj, Anupama, and the police that both Nirmit and Dimple are not in good condition.

The doctor tells them that Dimple’s condition is worse as she has been badly molested all over and she had to inform Nirmit about Dimple’s situation.

Anupama cries on Anuj’s shoulders while he asks her to meet with Dimple once as she needs her at this time.

After Anuj leaves with the police, Anupama musters the courage to face Dimple as she cannot break down in front of her.

© Copyright tellybest.com, 2022, 2023. All Rights Reserved. Unauthorized use and/or duplication of any material from tellybest.com without written permission is strictly prohibited.
Cached Saved on: Wednesday 23rd of November 2022 11:22:04 PMCached Disp on: Thursday 1st of December 2022 12:18:53 PM