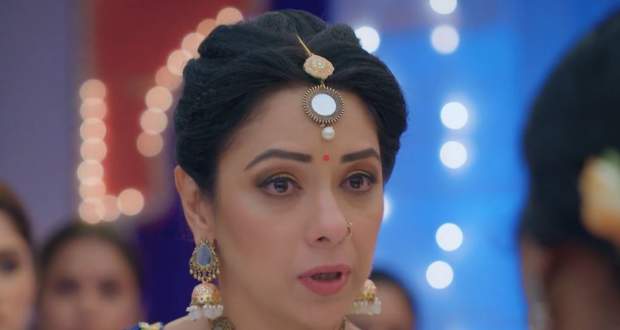 Today's Anupama 23 October 2021 episode starts with Anupama praying to God to give her strength while answering every one.

Anupama starts by giving a strong answer to the people in the society who point fingers at her and Anuj's friendship.

Further, Anupama tells Baa that she has put on a curtain of thoughts in front of her eyes which forbids her from seeing things in a positive way.

Anupama tells Baa that she can say anything to her but warns Baa that she will not listen to anything from anyone against Anuj. The patience line is crossed and she won't tolerate Anuj's insults anymore.

Baa and others will be shocked at Anupama's behavior.

Further, Anupama will take everyone for the Raavan Dahan where she'll say that this Raavan died a long time ago but the Raavan of bad thoughts and mentality is still in the society.

Anupama says today that Raavan has to die and asks Anuj to do the honor of igniting Raavan's idol.

Vanraj looks in rage at Anuj while he shoots the arrow to the Raavan's idol.

After the Dahan, Baa says that after all this Anupama and she can not stay under one roof.

Later, Anuj and GK return back home. Anuj will be filled with happiness as Anupama took a stand for him. Anuj says the moment he has awaited arrived but there are no confessions yet.

Meanwhile, Anupama reaches home and recalls how she stood against Baa and feels bad.