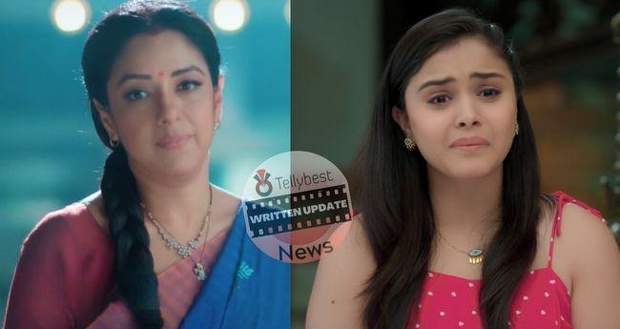 At Shah house, Hasmukh gets confused to see Leela write something on the notepad with all her jewellery kept in front of her.

She tells him that she may not live very long so that is why she is writing about what to give to whom.

Just then, Pakhi comes and asks Leela to cook Namkeen & sweets for the whole family, trying to cheer her up.

Meanwhile, at Kapadia Mansion, Barkha notices how Adhik & Ankush are trying to gel up with Anuj & Anupama.

They all make sweets for their office staff & discuss implementing gift registry systems in their company.

Just then, Anuj says he will do this task as it may not be possible for Anupama because it involves taxes and certain foreign laws.

She immediately gets hurt & excuses herself from the table.

Meanwhile, Kavya, Jignesh, & Pakhi keep trying to cheer Leela up while Vanraj emotionally smiles at all of them.

Anupama says they will but they have to make sure burning crackers do not disturb all the other living beings, including animals & birds around them.

Anuj greets them when they return to Kapadia Mansion while Anupama hesitates to meet his eye.

Anupama tries to leave but Anuj holds her by the saree pallu & apologizes.

She then tells him he need not apologize as he spoke the truth.

Getting emotional, Anupama tells Anuj that his company has all his hard work and she wants to help him but she can't as she is less educated.

Anuj gets angry at Anupama's comment & tries to reason while she feels bad for not being educated as Anuj.

After she spells out her desire to study, Anuj lets her know that degree and experience don't equate as she is the best at what she does.

Afterward, all the family members of both the Shah & Kapadia families gather in their houses to do the Dhanteras Puja.

Later, Vanraj apologizes to Kavya for not being able to give her something expensive on Dhanteras but she says she doesn't need anything but the happiness of her family.

Leela then comes & gives Kavya a portion of her jewellery as a gift.

Similarly, Anuj gifts Anupama a college admission form in a necklace box that shocks her.

© Copyright tellybest.com, 2022, 2023. All Rights Reserved. Unauthorized use and/or duplication of any material from tellybest.com without written permission is strictly prohibited.
Cached Saved on: Monday 21st of November 2022 05:41:25 AMCached Disp on: Thursday 1st of December 2022 01:20:55 PM