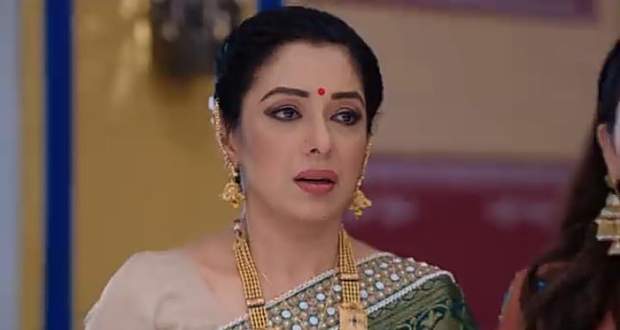 Today's Anupama 23 September 2021 episode starts with Anuj serving snacks to everyone and them praising it while he reveals that he is the one who made it and gets complimented.

Everyone is eating except Leela and GK insists she eats while Vanraj and Paritosh stand before the door and hear the family members praising Anuj.

Anupama tells that she heard that Anuj was a champion in arm wrestling during his college days while Vanraj comes there and challenges him to around while saying that he used to do all that back in the days too.

They start arm-wrestling and Anupama stands tense while Paritosh gets angry seeing Samar cheer for Anuj and not Vanraj.

Anupama turns away while Vanraj wins the match and starts boasting about it.

Anuj gets a call and then informs Anupama that they both have to leave for Mumbai for a day for the training which angers Vanraj.

Samar, Hasmukh, and Kinjal encourage Anupama to go while Leela and Paritosh say that Anupama will not come with her when Anuj says that Anupama can make her own decisions and asks her if she will come or not.

She asks Anuj when they will be leaving which shocks the Shah family after which they all leave for home while Anuj tells GK how hard it will be for Anupama to go against her family and leave her home for work.

Meanwhile, Anupama is giving medicine to Hasmukh when Leela tells her that she can take care of her husband and family.