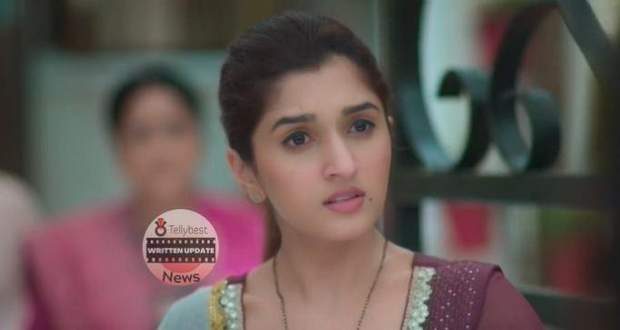 Today's Anupama 23rd September 2022 episode starts with Kinjal shutting up Barkha who asks her to divorce Paritosh and says she doesn't want to talk on this matter which irks Barkha.

Meanwhile, Anupama waiting outside the art class video calls Anuj while both praise each other respectively for time management and appraisals.

Kinjal rushes to Anuj while Anupama too hears her getting hyper as Arya’s throat is choked.

Anupama guides her but in vain and Anuj calls for Barkha and Ankush but Adhik informs them of their non-availability.

At the same time, Anuj orders Adhik to go and bring the doctor home as early as possible.

In the Shah House, Leela being hyper asks Samar to take her to Paritosh but he refuses and says he doesn’t listen to anyone.

She accuses Anupama of the situation and fears for Paritosh's life being destroyed.

Leela asks Vanraj to get Paritosh back as he also deserves the chance as Vanraj was given.

Meanwhile, Kinjal hastens to make Anuj walk in a hurry leading him to fall and hit by the table on his head and she shouts for help.

Simultaneously Anupama enters and is stunned to see Anuj lying on the floor in pain.

Anupama feels dumb as her mind doesn’t work while she tries to handle both sides.

Meanwhile, Vanraj gets Paritosh’s call and he speaks about the discrimination he faced for the same mistake Vanraj also committed in past.

He complains to Vanraj tensely for doing this disfavor, and says that he will never forgive Anupama and him.

Paritosh tells him to end his life as he gets defeated by his own parents.

Vanraj worriedly calls him frequently while Paritosh holds a sharp knife to kill himself.

At the same time, Anupama tries to handle the circumstances in a mindful way by giving a home remedy to Kinjal for curing Arya’s discomfort and a hot bag to Anuj.

She apologizes to Anuj and Kinjal and accuses herself of the whole situation.

Meanwhile, Anuj gets a call from Anu’s school about the non-filling of the admission form till today as the last date and Anu’s rejection due to this.

Again Anupama accuses herself while crying uncontrollably of not being able to handle her responsibilities well whereas Anuj consoles her.

Samar comes to the rescue and tells about Paritosh’s friend eyeing him and asks him not to worry.

However, Kinjal decides to leave Anupama’s house and asks Anuj for this.

Anuj tries to make Kinjal understand that Anupama will feel bad knowing this if she leaves her.

Anupama half asleep keeps murmuring about her chores and workload depicting her extra responsible nature.

Meanwhile, Anuj prays to God to make his health good so that he can support his Anupama.

At the same time, Kavya asks Leela about the importance of this Puja and she explains it.

She plans to go somewhere after the completion of Puja.

© Copyright tellybest.com, 2020, 2021. All Rights Reserved. Unauthorized use and/or duplication of any material from tellybest.com without written permission is strictly prohibited.
Cached Saved on: Friday 30th of September 2022 05:16:53 PMCached Disp on: Saturday 1st of October 2022 05:52:08 PM