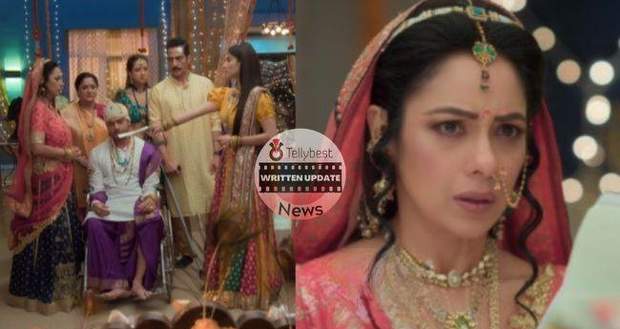 However, upon asking what is in it she goes and burns it.

Thinking about Anuj's health she takes him to his bed and makes him rest with the nurse and GK there to look after him.

She comes down and retorts that Barkha and Ankush have started a Mahabharat against her and claims that whenever at all a Mahabharata starts there is the rise of Lord Krishna.

She begins praying to Lord Krishna in from of her. Meanwhile, Anuj's hands begin moving and his eyelids start fluttering.
He begins calling for Anupama by constantly repeating "Anu".

GK notices the movements and urgently asks the nurse to call Anupama.

The nurse speeds into the living room and tells her that Anuj has woken up.

Anupama gets overwhelmed and is unable to contain her happiness.

While Ankush, Adhik, and Barkha get shocked, Vanraj and the Shahs go follow Anupama to see Anuj.

As Anupama enters the room Anuj's mouth curves into a smile and holds Anupama's hand.

They have a moment when Anuj sees Barkha and Ankush. He looks at them furiously and insults them for telling lies and degrading Anupama in all the sense of characters just to take over the business and money.

In Barkha's defense, she starts proving how Anupama supported Vanraj even though he pushed Anuj.

Anuj clarifies their misunderstanding by telling the truth that he and Vanraj were talking when Anuj slipped off the cliff.

Vanraj tried to hold his hands and pull him up, even though Anuj asked to let go, but they both fell off together.

This elates the Shahs and they thank Anuj for the clarifications.

He asks Anupama how to deal with Barkha and Ankush and further looks down upon them.

Anuj insults that they came from the US because their business went down there and still Anuj and Anupama accepted them with love.

Continuing he exclaims, this is how they pay Anuj back. He taunts them about legal notice when suddenly Choti rushes in and hugs Anuj.

He is overjoyed to see her and Choti asks him to cut the cake again.

Everyone celebrates Anuj's birthday together and the Kapadia family trio (Anuj, Anupama, Choti) is together again.