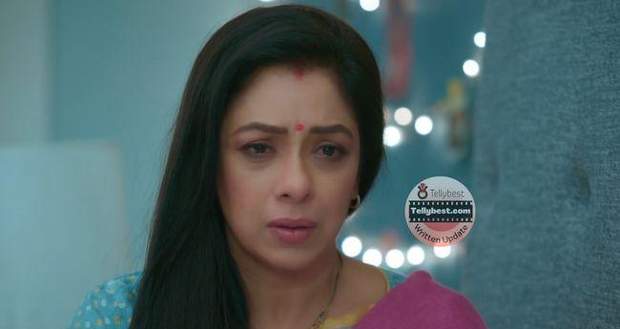 Anuj tells Anu that Pari is fine as Anupama is with her and is taking perfect care of Pari.

Anu asks Anuj if Anupama will come back to her after Pari gets fine to which Anuj replies with a reassuring yes.

Anu apologizes to Anuj for disturbing him and Anupama in the middle of the night leaving Anuj’s heart shattered.

Meanwhile, Anupama calls Anu while the doctor checks on Pari and asks her how she is doing.

Anu says she is fine and Anupama does not need to worry about her as she can manage things alone.

Anuj observes Anu’s behaviour and gets anxious as he sees the similarity with Anupama’s behavior.

On one hand, Anupama tries to make Pari fall asleep, while, on the other hand, Anuj puts Anu to sleep in his lap.

Anuj calls Anupama and asks her how Pari is doing to which Anupama says that she is trying to put her to sleep.

As Anupama asks Anuj about Anu, he assures Anupama that he is there to take care of their daughter.

The next morning, Anuj prepares Anu for her school while Anu asks him about Pari’s condition.

As Anuj tells Anu that Pari is fine now, Anu asks Anuj if Anupama can accompany her to the school to register their entries for the annual day.

Anuj gets heartbroken as Anu promises not to disturb him and Anupama like the earlier night as she can manage things alone.

Anuj hugs Anu dearly and asks her to never think like that while Anupama enters the house with Pari.

Anu shares a tight hug with Anupama and asks her if she is all right now.

Before Anuj can say anything, Leela, Hasmukh, Toshu, and Samar enter the house along with bags.

Pakhi also enters the house which shocks everyone. Leela justifies Pakhi by saying what she would do there alone without any family members.

Anupama says that Pari was crying as she was taking her away from her lap so she brought Pari with her.

Without Pari near them, Leela and others were also getting restless so they accompanied Anupama there.

Leela says they will stay there until Kinjal, Kavya, and Vanraj return, while Hasmukh says sorry to Anuj for disturbing them.

After everyone leaves, Anuj asks Anupama if Pari is fine and whether she needs to do anything else to assist Pari.

As Anupama answers with a no, Anuj asks her if she can accompany Anu to her school for the annual day.

Anupama says that she is going to get ready quickly and walks away but Anuj stops her as he needs to talk to her.

Anuj says that he has no problem with the Shahs staying with them for a few days and is rather happy about that, but what he saw the earlier night shook him.

Anuj tells Anupama how Anu was thinking about Pari in that frightened state and trying to suppress her feelings for the sake of others.

Anupama gets shocked as she hears Anuj saying that Anu feels guilty about asking for her mother who was busy somewhere else.

Anuj says that Anupama is the best person he has seen but he does not want Anu to take on these qualities from her.

Asking Anupama to spend more time with Anu, Anuj ends the discussion as both Leela and Anu call for Anupama.

Barkha gets irritated hearing Leela’s voice and asks why she is acting like it is her Shah house.

Later, Anuj asks Leela to learn the gas directions from Dimple as Anupama is busy preparing Anu for school.

Leela understands Anuj’s tone and silently goes away with Dimple while Anupama hugs Anuj for helping her.