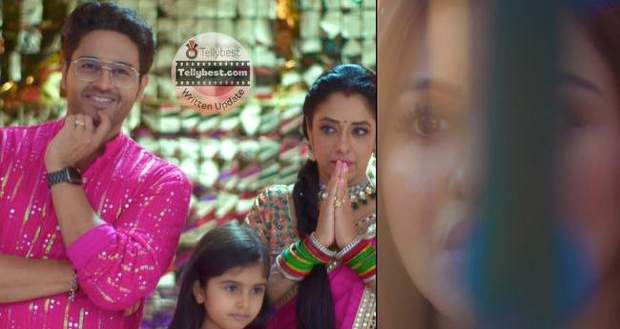 Today's Anupama 24th January 2023 episode starts with Anupama, Anuj, and Anu joining the others to dance and fly the kite together while Vanraj and Leela make sour faces.

Seeing that Vanraj is not willing to join the dance, Kavya starts dancing with Mohit making Vanraj feels jealous.

Everyone starts flying their kites and tries to protect them from others with Maaya secretly joining in too.

Leela tries to cut Samar and Dimple’s kite to her fullest capacity but her kite gets cut by Maaya leaving her disappointed.

Everyone in the Shah family and Kapadia family get shocked to see a yellow kite cutting all their kites except Anupama, Anuj, and Anu.

Anupama watches the yellow kite coming toward her and controls her kite to be protected from that kite so they can win.

Maaya glances at Anuj and Anupama getting all the cheers and latches on their kite so that she can cut it.

Anupama asks whose kite it is and is trying to cut her kite continuously but no one comes forward.

Finally, Maaya’s kite cuts Anupama’s one while everyone groans in disappointment.

Anuj tries to cheer up Anupama and Anu while Anupama says sorry to Anu for losing the kite competition.

Meanwhile, Maaya brings back her kite and turns around as Anu screams her name after spotting her.

Anuj and Anupama get surprised to meet Maaya physically for the first time and watch Anu running toward her & leaving them.

Maaya shares a hug with Anu and confronts Anupama and Anuj as they introduce themselves as Anu’s parents.

As Maaya says that Anu may have told them everything about her, Anuj replies that they are yet to learn much more about her.

Anu leaves to get the kite that Anupama and Anuj were flying while both Anupama and Maaya ask her not to go too far.

Maaya says that even though her name is “Maaya”, she has the relation of a “Maa” (mother) with Anu.

Anupama and Anuj do not get the actual meaning and stare at each other with confused eyes.

However, everything becomes crystal clear as Maaya announces that she is Anu’s biological mother who has come to take her daughter back.

Anupama and Anuj go blank hearing Maaya’s words and hold each other’s hands as she says that she will visit their house soon to take back her daughter.

Maaya leaves after bidding goodbye to Anu and asking her to fly their kite as it will fly longer compared to Anuj and Anupama’s.

Leela and Vanraj hear everything as they were standing behind Anuj and Anupama and leave silently as they watch them hugging Anu dearly.

Leela says that whatever is happening is not good but claims that Anupama is getting the results of Karma.

Vanraj asks Leela not to say such a thing as Anuj and Anupama’s life revolves around Anu and they cannot live without her.

Later, Vanraj and Kavya return home in an auto while Kavya complains about getting her skin and hair polluted.

Kavya asks Vanraj how her first live event was to which Vanraj replies what he is supposed to say when his wife was spraying perfume on strangers wearing short clothes.

Vanraj says that he does not like Kavya’s modeling career at all but Kavya says that she loves it and that is enough.

On the other hand, Anuj and Anupama try to know how Maaya came to know Anu but fail to figure out anything as they ask Anu.

Anu gets asleep while Anuj and Anupama get anxious about what they are supposed to do now to protect their Anu.

© Copyright tellybest.com, 2022, 2023. All Rights Reserved. Unauthorized use and/or duplication of any material from tellybest.com without written permission is strictly prohibited.
Cached Saved on: Wednesday 25th of January 2023 08:46:09 AMCached Disp on: Sunday 5th of February 2023 02:43:15 AM