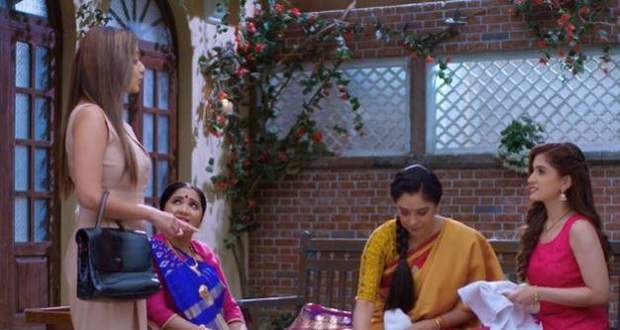 Today's Anupama 24 June 2021 episode starts with Geeta requesting Anupama to work with her as she is the lady of pure emotions.

Later, Anupama tells Leela that she should try giving Kavya a chance for being a good daughter in law.

Further, Vanraj advice Kavya that she should focus on his mother and father's caretaking and not fight with Anupama.

After some time, Kavya makes Anupama feel bad by asking her to go to her parental mother's house as there won't be any ritual for Vat-Savitri pooja for her.

Anupama feels unfortunate but hides her feelings in front of everyone.

Later, Vanraj takes blessings from his parents and starts his new beginning at the cafe.

On the other hand, Anupama expresses her feelings to Leela by saying that she is having mixed feelings as henceforth she won't be performing any married woman festive rituals.

Leela tries consoling Anupama and tells her that everything will sound good after some time.

© Copyright tellybest.com, 2020, 2021. All Rights Reserved. Unauthorized use and/or duplication of any material from tellybest.com without written permission is strictly prohibited.
Cached Saved on: Tuesday 30th of August 2022 08:46:11 PMCached Disp on: Tuesday 27th of September 2022 05:15:58 PM