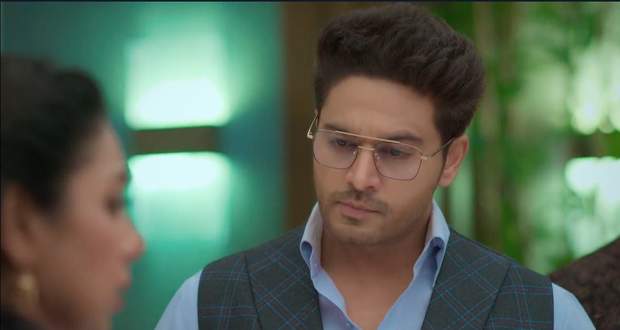 Anupama remembers how Anuj while fighting, told her that she needs to fight her own battles in case he is not there for her in the future.

She holds his shirt collar playfully in her hands and asks him never to repeat something like this again.

Meanwhile, Adhik talks to Pakhi on the call asking her if she wants to meet up tomorrow and she says yes for a coffee.

As soon as Adhik cuts the call, a sly smile appears on his face and his intentions with Pakhi become unclear.

It appears as if he is not really attracted to her but just wants to play with her in order to hurt Anupama.

As Anupama goes into the living room, Barkha tells Anupama that she’ll talk to Anuj about the fight, as he might be upset over Anupama’s ex-husband’s involvement in her life.

As this happens, Anuj walks in and gives some scented candles as a gift to Anupama, seeing that Barkha seems jealous and upset.

Anupama tells her that fights are common in relationships and she won’t let anyone else put a strain on their relationship.

She questions Barkha about the family accounts and tells her that the bills and expenses don’t match.

Barkha seems concerned about this and Anupama notices her panic as well.

The next morning, Kinjal wakes up with Anupama sleeping on their bedroom floor, keeping guard.

She asks Anuj and Anupama to drop her home after breakfast.

Adhik tells Barkha that she does not need to be concerned if he’s gonna get a share of this family’s wealth or not because he has a plan now.

Meanwhile, in the kitchen, Anuj is making laddoos for Kinjal and Anupama is concerned if their relations will get better with the Shah family.

Barkha gives flowers to Kinjal and says to not return with a baby in her womb to avoid risks.

Anupama is receiving missed calls from Vanraj while she talks to Kinjal and the rest of the family.

She calls him back saying that they’re just about to drop Kinjal off at her house.

In the Shah house, Hasmukh helps out Leela with some household work and says he’s inspired by Anuj and Anupama’s relationship.

As they’re talking, Rakhi enters the house and taunts Hasmukh about doing household cleaning, to which Leela retaliates by telling her to mind her business.

Their argument heats up and Rakhi comes into their house and sits on the sofa.

As Leela tries to take the mop away from Hasmukh, Anupama comes in and holds it from his hands.

© Copyright tellybest.com, 2022, 2023. All Rights Reserved. Unauthorized use and/or duplication of any material from tellybest.com without written permission is strictly prohibited.
Cached Saved on: Saturday 28th of January 2023 02:25:44 PMCached Disp on: Sunday 5th of February 2023 01:38:33 PM