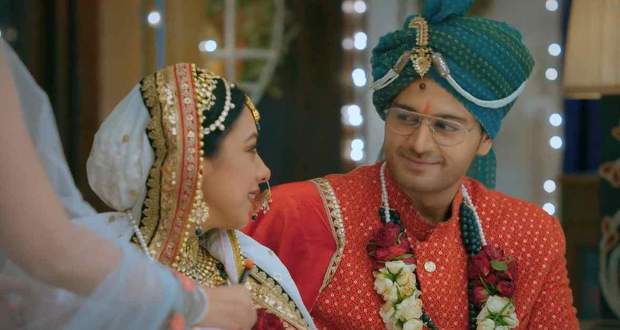 Today's Anupama 24th May 2022 episode starts with Anupama receiving a surprise by her family as they participate in her Greh Pravesh.

Meanwhile, Anuj explains that now Anupama will have three maternal homes as he doesn't want Anupama to feel like she is with her in-laws.

Later, Devika explains how they planned to move into the new house to welcome Anupama and Anuj.

The Shahs feel happy to be included in wedding rituals from both the groom and the bride's side.

Further, GK presents Anupama with the Shagun and the wedding gift.

The wedding gifts include Anuj's businesses and his properties while Anupama is shocked.

Meanwhile, Anuj selflessly presents Anupama with every responsibility from a diamond to a simple vegetable.

Later, Anuj calls Anupama the Lakshmi of his house not just on paper but in real life.

Anuj motivates Anupama to manage the responsibilities just like she learned to fight for her rights.

Further, Anupama signs a cheque of 11 lakhs and marks the new beginnings.

Later, Anupama feels grateful for having Anuj who turned her world into a beautiful fairy tale with her in-laws and family.

Meanwhile, Anuj and Anupama take a tour of the Kapadia Mansion.

While the family takes a tour, Kavya expresses her feelings on how she also deserves a loving partner like Anuj.

On the other hand, Anupama and Anuj take a tour while Anuj suggests Anupama should change as she might be tired of the heavy jewelry.

Further, Anupama and Anuj kiss each other's cheeks while he promises Anu to treat her like a bride every day.

Later, Anuj and Anupama play the post-wedding games and enjoy themselves with the family members.

The guests leave on a happy note while Anupama sees an empty photo frame missing her family.