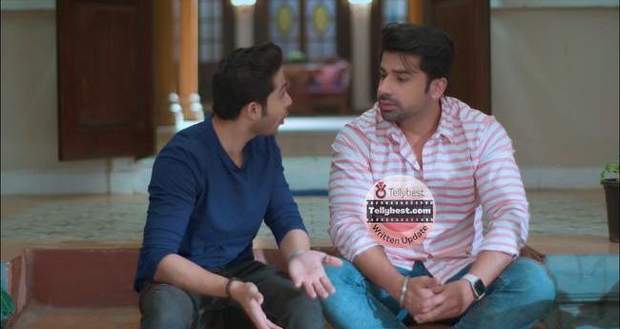 Today's Anupama 24th November 2022 episode starts with Anupama entering Dimple’s room to see her and spotting her lying on the bed with a senseless face.

Dimple stares into nowhere with her dead eyes which makes Anupama think about the bubbly expression she used to have on her face before the incident.

Anupama comes to Dimple and informs her that she is there to see her which makes Dimple break into tears.

Caressing Dimple softly, Anupama asks her not to cry and reminds her that they have a fight ahead of them.

Anupama apologizes for not being able to save her from that horrifying incident while Dimple asks a question that shatters Anupama.

Dimple says that for the first time in her life, she has the urge to ask God why she is a girl.

Anupama cries along with Dimple and encourages her to live while keeping her head high as she has not done anything wrong.

Dimple asks Anupama about Nirmit to which Anupama replies that Anuj is with him as he is injured.

As Anupama assures that all of them are with her in this case, Dimple says that she has to give the police her statement and asks Anupama to call them.

Anupama kisses Dimple on her forehead and comes outside to call the police when she hears Nirmit’s words.

Meanwhile, Leela cries in front of Kavya telling her that she does not want anything bad to happen to Pakhi and loves her very much.

Kavya says that she understands what Leela’s intentions are even though others question them.

Leela says that Pakhi needs to be brought into check before she starts to destroy all their lives with her distorted behavior.

Kavya spots Vanraj with the box of French toast and says that she will deliver them to her house.

At the same time, Anupama and Anuj try to make Nirmit understand that he cannot run away from the case due to the fear of common people.

Nirmit says that he does not want to get involved in police and court issues as the case will drag on for several years.

Anuj and Anupama tell Nirmit that his thinking is wrong and no crime against women should go unreported to the police.

On the other hand, Kavya delivers the toast to Pakhi and spots Adhik doing the household chores while Pakhi relaxes.

Kavya suggests Pakhi focus on her career and joins her college but Pakhi asks Kavya to get out of the house.

Kavya says that Pakhi will have to face the consequences of her actions soon and leaves.

Back at the hospital, Dimple gives her statement to the police while Anupama and others clap for her bravery.

Dimple says that she can fight against the whole world until Nirmit is with her and feels happy.

However, Anupama notices Nirmit’s hesitant expression and gets anxious about his decision to be there with Dimple.