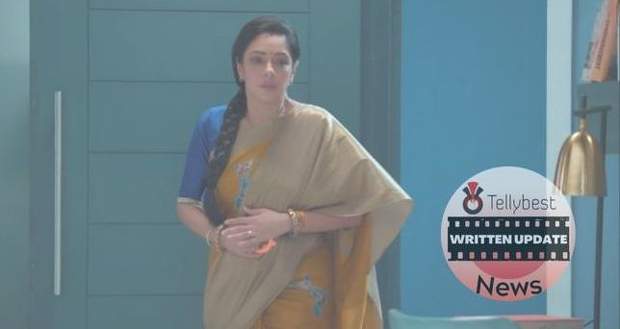 Today's Anupama 24th September 2022 episode starts with Anupama giving her point of view regarding Shradh’s pooja and for making birds and animals eat not only on one day but every day.

She says the real fortune lies in helping the speechless animals.

Meanwhile, Anuj advises her to be normal and not try to be extraordinary.

At the same time, he hears the baby cry and asks whose voice is this forgetting Arya.

Anupama goes to see Arya and Kinjal and Kinjal thanks Anupama for helping her last night.

Kinjal discusses the dilemma she is facing about her future plans.

However, Anupama tries to make her understand to think without getting pressured as she is a modern independent woman.

Meanwhile, they hear Leela’s voice calling her and get shocked.

Barkha and Leela fight over meeting Kinjal and Arya while Anupama handles them.

Leela caresses Arya and asks Kinjal to come back home as their home seems deserted without them.

She compares her with Anupama and says that even she has lived at home after Vanraj’s betrayal.

Leela even tries to touch her feet in expressing an apology and insists Kinjal just come home.

However, Barkha feels irked and says drama is seen now on a daily basis while Anuj thinks that every day a new battle begins for Anupama.

At the same time, Kavya informs Vanraj about Leela’s going to Anupama’s house.

Vanraj feels extremely worried seeing the circumstances while Kavya tries to help him to relax.

Meanwhile, Leela on insistence tries to pull the baby from Kinjal’s hand but Anupama shouts and says she is a baby, not a toy to snatch.

Moreover, Leela tells her that she should insist that Kinjal go home instead of provoking her to destroy her life.

Leela accuses Anupama of taking revenge on her for past actions while she asks Samar to take Leela back home.

Leela worries about Arya and scares Kinjal about the future of her without a father and how much she will need to tolerate because of this as she is not strong like Anupama.

Moreover, Leela says that thousands of women suffer husband betrayal but they all don’t leave their husbands like Anupama.

Anuj gets angry hearing harsh words about Anupama and asks Samar to take Leela home as early as possible.

At the same time, Anupama tries to explain to Leela that it's Paritosh and Kinjal’s life and they will decide for themselves.

Kinjal accuses herself of all the situations and of harassing Shah’s by distancing Arya from them.

Moreover, Samar supports her and says she is absolutely right and he will always support her as a younger brother to her while Kinjal cries unstoppably.

He asks Kinjal to follow her heart and hugs him.

Anuj advises her to be strong in these situations and recite a poem about women's strength and think for herself.