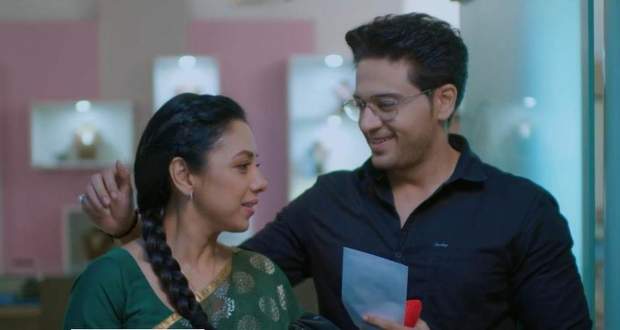 Meanwhile, Vanraj tries to reminisce his old memories with Anupama and the times and moments they shared together.

On the other hand, Anupama feels a bit awkward about the sudden initiative taken by Vanraj to take Anupama to the breakfast spot.

Meanwhile, Rakhi Dave arrives and informs Malvika about the alleged breakfast date of Vanraj and Anupama.

Malvika is worried about Anupama as she is aware of Vanaraj's tactics and the lengths he can go to hamper Anuj and Anupama's relationship.

Devika calls and informs Anuj about the situation

Anuj stays calm and explains to Malvika about the concept of co-parenting and it is impossible for Vanraj and Anupama to cut their ties all of a sudden.

Anuj says Anupama is her partner and trusts her blindly even though he knows the true intentions of Vanraj.

On the other hand, Vanraj tries to strike a romantic conversation with Anupama while Anupama dodges his shot and says Vanraj should sit alone and listen to the heartbroken songs instead of bothering her.

Meanwhile, Kavya fumes in worries about the breakfast date while Rakhi Dave tattles in her ears about how awkward Vanraj and Anupama's relationship is as they find new ways to talk to each other.

Rakhi says Kavya is the master of her own life and should decide soon instead of getting humiliated every now and then.

Vanraj tries to talk about the old memories

Anupama says she remembers how Vanraj kicked Anupama out of his house giving her a lifelong trauma.

Anupama tries to confront Vanraj on the tactics he is using to harm her new start and her wedding with Anuj.

Meanwhile, Vanraj tries to address the issues he had as an individual and accepts his shortcomings.

Later, Vanaraj says he feels jealous even though he didn't treat Anupama the way she deserved.

Vanraj confesses the jealousy he feels while Anupama responds she watched the same things happen to her while Vanraj was getting married to Kavya when she was sick.

Vanraj tries to prove his point about how he is not as great and selfless as Anupama but is selfish instead.

Anupama replies, Vanraj should play the role of Ravan if he feels like being a villain all the time which pricks on Vanaraj's ego.

Fumed by his hampered fragile ego, Vanraj tries to curse Anupama saying Anuj will change after marriage and Anupama will never be happy in her married life.