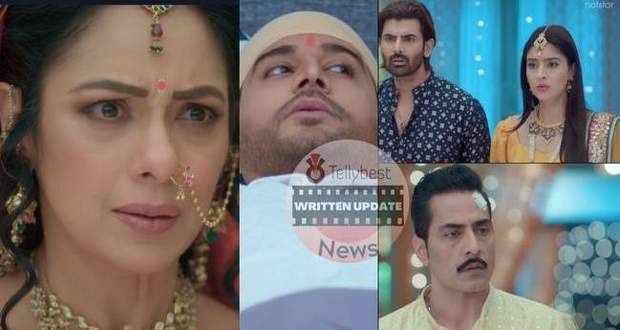 Today's Anupama 25th August 2022 episode starts with the Shahs and the Kapadia present in the living room doing rituals for Anuj to prevent the cast of any evil eye.

Anuj thanks Vanraj for helping him in an adverse situation and Vanraj complies with a nod, saying that anyone would have done the same.

Anuj then taunts Barkhaa and Ankush indirectly that in times of need even your own family leaves your side sometimes.

He asks Vanraj to stop hatred and start a new bond with love and support.

While Anupama takes Anuj for some rest, Leela sees Rakhi and Barkha having a conversation, Leela calls them the true duo but Rakhi taunts Barkha that she is afraid Barkha, Ankush and Adhik will be seen down Temple stairs.

The support of Leela’s to Rakhi’s claims further makes Ankush and Barkha worried.

GK distributes return gifts to the Shahs for departure when Vanraj tells the trio to leave the house while there is still time else Anuj will kick them out of his house.

The next morning, Kavya seeks Vanraj’s forgiveness for doubting him to which he easily forgives her, and instead thanks her for supporting him even in doubt.

In the Kapadia mansion, Anupama, Anuj, and Choti are having a good time when suddenly Barkha and Ankush come in and try to explain to Anuj why they mistrusted Vanraj and Anupama but Anuj tells them to cut the chase since he does not want to argue and GK informs the arrival of the doctor.

Pakhi and Adhik meet in a car and Adhik explain to her that he will ask forgiveness from Anupama from Barkha’s side for her unethical conspiracy.

However, he does not want any crack in their bond because of their family to which Pakhi embraces him with love.

Meanwhile, at the Shah house, everyone is having family moments with Vanraj and appreciates him for his act. Samar and Hasmukh tell him that they are proud of him and everyone gets together hugging Vanraj.

Anupama converse with the doctor regarding Anuj and he says that Anuj is perfect and just needs to be taken care of for a while which makes Anupama happy.

She is about to go back to Anuj when she sees Barkha and Ankush. Barkha tries explaining to her but Anupama does not listen, instead, she tells her to leave.

Barkha says that where would they go with Sara and Adhik but Anupama tells her that they should have thought of this before ruining themselves.

She further continues that this is Anuj’s demand to kick them out against which she won’t go and does not even want to.