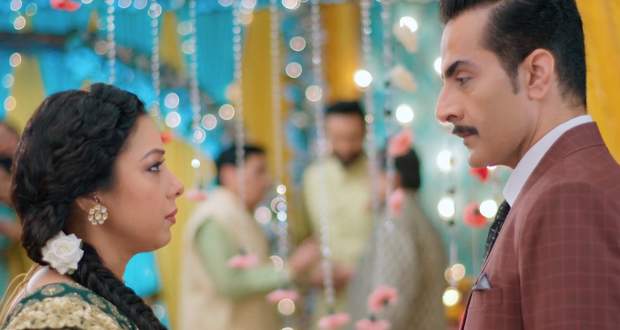 Today's Anupama 25 December 2020 episode starts with the Shah family practicing for Sangeet. Further, Pakhi is excited that her father will also come and stay for two days.

Anupama is still upset while Bapuji consoles her. Paritosh and Kinjal arrive and are in a foul mood.

Anupama asks Paritosh and Kinjal to not spoil their wedding memories and enjoy the precious moments.

She wishes for the happiness of her family to stay. Meanwhile, Rakhi is planning something evil and has an envelope in her hand.

Vanraj confronts Anupama about having a problem with his presence. He doesn’t want her to create drama while Anupama points she is not like him.

They argue for a while and later the rituals of Kinjal and Paritosh’s Sangeet begin. Rakhi arrives and hurts Anupama while she ignores her act.

Rakhi wants to know about Kavya and calls her Paritosh’s other mother. Baa imagines slapping Rakhi while Samar asks everyone to start the Sangeet.

Kinjal asks Anupama to dance alone as she doesn’t need anyone for anything. Anupama gives a soulful performance on a popular song.

She portrays the feelings of Kinjal while Kinjal also joins her. Anupama makes Rakhi also dance along with her while Samar and Nandini’s performance is next.

They mesmerize everyone with their dance moves.