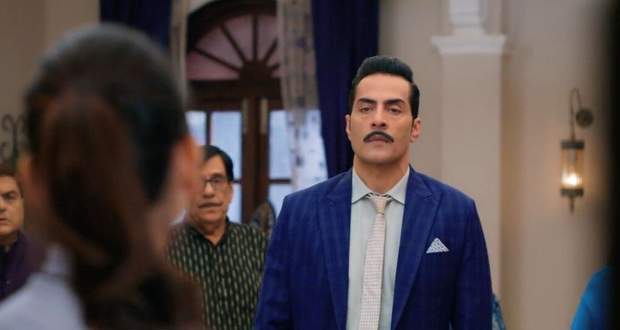 Today's Anupama 25 December 2021 episode starts with Anuj and Anupama finding out about Malvika’s direction from a stranger and running to search for her.
Malvika asks Vanraj for confirmation to stay at the house to which Kavya suggests she stay at any good hotel as here she will not get any privacy.
Malvika was about to walk out of the house when Vanraj stopped her by allowing her to stay at their house. Malvika thanks him heartily.
Kavya pulls aside Vanraj and asks him why he gave her permission. Vanraj replies, explaining Malvika’s state and emotional situation.
He further reminds Kavya how she entered this house in the same manner, and yet Anupama let her stay there in the past.
Malvika asks them if they are fighting because of her while Kavya bursts out by telling her to get out of the house.
However, Anuj interrupts Kavya’s words by warning her politely to not talk to Malvika like that.
Meanwhile, Anuj apologizes to Malvika again and requests her to return to his house with him but Malvika denies it.
She tells him that she is not angry anymore but she wants to stay with the Shah family as she loved the people and the vibe of the house.
Anupama agrees to Malvika’s request to stay there, making Anuj a bit surprised.
Malvika thanks Anupama for her help, and tells her that she was not angry with her, but with Anuj.
Anuj and Anupama leave from there, Anupama apologizes for making the decision but Anuj understands her.
Anupama asks why Malvika said she was not angry with her, and Anuj gets nervous.

© Copyright tellybest.com, 2020, 2021. All Rights Reserved. Unauthorized use and/or duplication of any material from tellybest.com without written permission is strictly prohibited.
Cached Saved on: Thursday 20th of January 2022 11:25:49 AMCached Disp on: Friday 21st of January 2022 04:21:40 PM