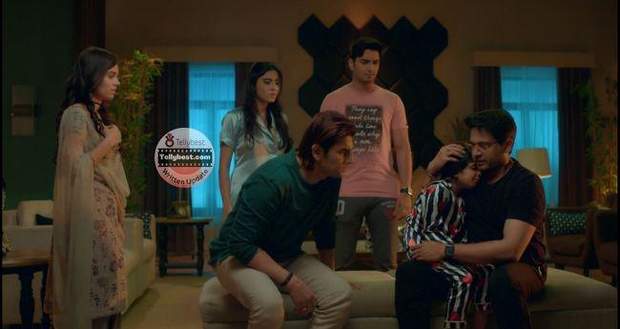 Today's Anupama 25th December 2022 episode starts with Little Anu getting ready for school and asking Anupama to come for her rehearsal in the evening.

Anupama kisses her before sending her off to school with Anuj.

Meanwhile, Leela starts her morning by fighting with Dimple and Barkha together.

When Anupama comes there, Barkha informs her about Leela unnecessarily scolding Dimpy just because she changed Pari's diaper.

Anupama lets Leela know that Dimple is just like her daughter, she doesn't want her mistreated in any way.

However, Leela says that since Anupama is Pari's Dadi, she should look after her, making Anupama clench her jaw.

Adhik tries to find his mobile charger before going to the office and Pakhi comes there with it.

However, Adhik keeps ignoring her as Pakhi tries to get his attention.

As he turns about, Pakhi loses her balance and is about to fall but he saves her.

Barkha sees them like this and gets angry at Pakhi, questioning whether she understands the meaning of a break or not.

Just then, Leela comes there and starts bashing Barkha for trying to create poison between Adhik & Pakhi.

She further taunts her that since it is not her house, she shouldn't speak and let Adhik & Pakhi romance which is missing from Barkha's life.

Meanwhile, Dimple asks Anupama why Leela hates her, concluding it is because of whatever happened to her.

Anupama tells Dimpy that if this is the reason she doesn't like her, it doesn't matter since it is Leela's loss.

Just then, Anupama hears her fighting with Barkha loudly in the hall.

Leela keeps taunting Barkha for trying to break Adhik & Pakhi's relationship instead of mending it.

Barkha then asks Anupama not to bear Leela anymore, because she might become the reason for her worsening relationship with Anuj.

After calming down things between them, Anupama calls Anuj with a heavy heart and tells him that she just wanted to hear his voice.

Meanwhile, Leela goes to complain about Anupama and Barkha to Hasmukh who questions Leela whether she acts the same way when she visits Dolly.

He asks Leela to stay quiet since she knows nobody can handle Pari like Anupama but Leela makes a drama out of it, saying everybody blames her.

Samar and Dimpy stop Anupama to take pictures for the dance event and pose like a couple which makes Leela fume.

Later, after Anuj returns from the office, Hasmukh strokes his forehead asking if he is tired.

Anuj gets emotional while Hasmukh feels Anuj is hiding something from him.

Anupama and Little Anu also return home while Little Anu gets excited to play with Pari.

However, Leela rudely asks her to stay away since Pari is sick.

Leela then asks Anupama to cook dinner for her and after seeing the tension between Barkha and Leela, Anuj realizes why Anupama suddenly called him in the day.