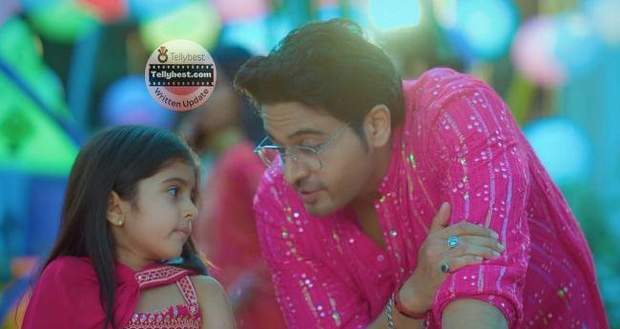 Dimple asks Anuj to give her Anu so that she can make her sleep in her room perfectly.

However, both Anuj and Anupama instantly say no to Dimple and say that Anu will sleep with them in their room.

Ankush asks them what the matter is as both Anuj and Anupama are acting very weirdly since the kite event.

Anuj and Anupama tell everyone that nothing has happened and they are just tired as they walk to their room with Anu.

Making Anu settle on the bed with pillows and blanket, Anuj and Anupama holds onto her hand and plant soft kisses on them.

Anupama asks Anuj how can a random stranger just come to them and claim that Anu is her daughter.

Anuj says that Anu is their daughter as they adopted her from the orphanage and no one can separate her from them.

Anupama asks Anuj to drop a message to Abhay (the orphanage owner) after he does not pick up his phone.

Giving Anuj a glass of water, Anupama asks him to calm down a bit as Maaya is just a fraud who wants money.

Meanwhile, Maaya says that Anuj and Anupama must think that she has come to get money, but her motherhood brought her there.

Maaya says with confidence that her case is unbeatable and she will get custody under any condition.

Abhay calls Anuj and says it is Maaya who left Anu at the orphanage 7 years ago and is Anu’s biological mother.

Anuj’s phone falls from his hand as he goes into shock and leaves the room, chanting that everything is real.

Anupama comes after Anuj and asks him to control himself but Anuj says that he will die if Anu gets snatched away from him.

Anuj asks Anupama where Anu’s biological mother was when she left Anu in the orphanage at such a young age; when Anu was praying for her parents’ love.

Anuj asks Anupama why Maaya has appeared now and is claiming to take Anu back after Anu has received the feeling of being in a family.

Holding onto Anupama, Anuj assures her that they are the mother and father of Anu and will not let anyone take away their daughter.

Meanwhile, Kavya gives everyone free samples of the perfume but Leela refuses to take them as she says that Kavya brought them after selling her self-respect.

Hasmukh asks Leela not to belittle Kavya’s profession for which Kavya thanks him.

At night, Anupama comes to their room but spots no one on the bed, and starts searching for Anu everywhere.

As all of them come outside to search for Anu, Anupama and Anuj see someone taking away Anu and leaving with a van.

Anuj and Anupama scream Anu’s name and Anupama wakes up from her nightmare and sees Anuj sitting after watching a similar dream.

The next day, Vanraj tries to convince Kavya to leave modeling by being romantic with her but Kavya clearly states that she will not stop.

Meanwhile, Anuj and Anupama take care of Anu as she catches a fever while Barkha and Ankush try to understand why both of them are acting so unusual.

Anu says that she needs to be better to welcome Maaya and refuses when Anuj proposes that they should ask Maaya to come the next day.

Anu says that she will get better once Maaya comes when the calling bell goes off and Anuj opens the door with hesitant steps.

© Copyright tellybest.com, 2022, 2023. All Rights Reserved. Unauthorized use and/or duplication of any material from tellybest.com without written permission is strictly prohibited.
Cached Saved on: Wednesday 25th of January 2023 11:57:37 PMCached Disp on: Sunday 5th of February 2023 03:21:05 AM