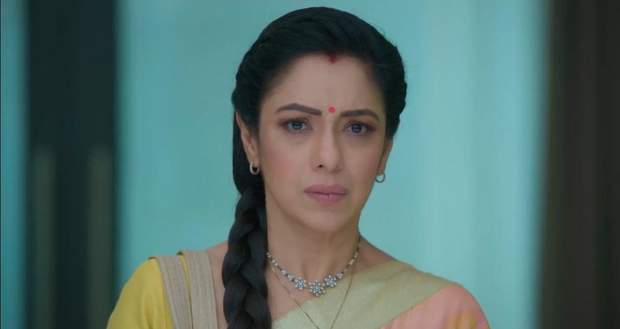 Today's Anupama 25th July 2022 episode starts with Vanraj driving while recalling how Anupama and Kavya told him to not restrain his kids or else they might go away from him.

Meanwhile, Adhik tells Pakhi that he will bring things for her to live comfortably at the Kapadia house and tells Barkha to keep her company.

At the same time, Anupama sees Anuj playing with Anu and gets emotional seeing Anuj shed tears of joy.

Elsewhere, Vanraj reaches home and learns that Pakhi is still not home making him worry.

Back at the Kapadia house, Anupama and Anuj play with Anu while she goes to offer cupcakes she made to other family members.

Anuj apologizes to Anupama for not being able to refuse Pakhi in the hall and tries to comfort her by saying that Adhik and Pakhi will never be alone together since someone is always at home.

At the Shah house, Adhik greets Kavya and asks her for Pakhi's belonging since she is going to stay at the Kapadia house as she was missing Anupama.

Kavya worries wondering how to inform Vanraj about it.

Anupama is about to inform him about the accident when Anu comes there and informs everything to Anuj.

Anuj gets angry at Anupama for not using the car while Anu stops him and tells him to not scold Anupama as she was not at fault.

Meanwhile, at the Shah house, Vanraj learns about Adhik and tells him to leave as he will bring Pakhi's belonging.

Anupama tries to talk to Pakhi and send her back while she talks to Vanraj but Barkha intervenes and says that if Anupama doesn't have to worry about taking care of Pakhi and Anu both as she will be with Pakhi.

Leela and Vanraj get angry thinking that Anupama has instigated Pakhi to come to Kapadia house and decide to bring her back.

Anupama demands Pakhi to return home but Pakhi refuses causing an argument between them.