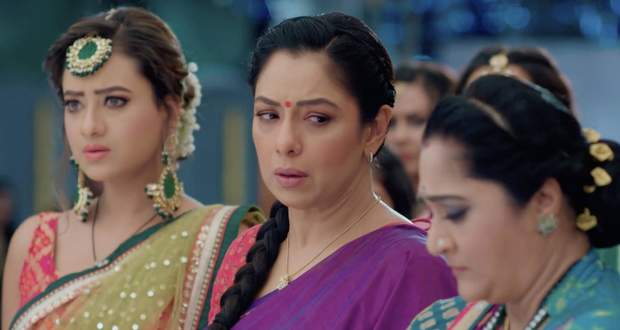 Further, Vanraj admires Kavya's festive look but Kavya refuses Vanraj to touch her as he gets a lot of sweat from work out.

Pakhi and Samar help Anupama decorating pooja plates and they have a good conversation about the importance of Vat Savitri pooja.

On the other hand, Vanraj does exemplary work and impresses his boss.

Afterwards, the neighbourhood people stop the Shah's from doing Vat Savitri Pooja with them.

They put allegations on the Shah's for breaking marriage laws as the divorce took place at the Shah family.

Hasmukh tries to explain to them that Anupama is living in their house as their daughter and they don't have any right to speak against it.

Later, the neighbourhood people themselves invite the Shah's for the pooja.

At the same time, Nandini joins the family and celebrate Vat Savitri pooja on a grand note.

Kavya was about to fall while taking pheras but Anupama supports her.

© Copyright tellybest.com, 2020, 2021. All Rights Reserved. Unauthorized use and/or duplication of any material from tellybest.com without written permission is strictly prohibited.
Cached Saved on: Saturday 22nd of January 2022 04:53:11 AMCached Disp on: Monday 24th of January 2022 03:14:49 PM