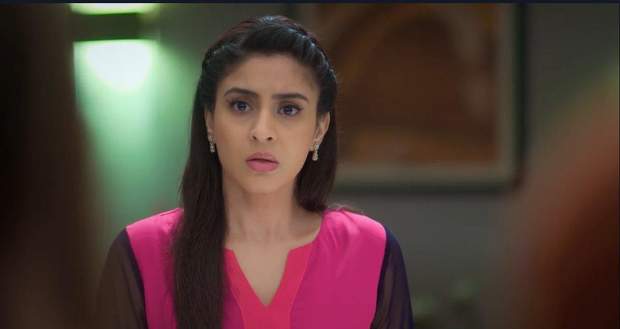 Today's Anupama 25th June 2022 episode starts with Anupama retaliating back at Rakhi for disrespecting Hasmukh, by getting her heels dirty with the mop Hasmukh was using.

According to Anupama, it was fair to do so as Rakhi already knew that no shoes are allowed inside the house.

Rakhi taunts Anupama that even after becoming so rich she has to carry a mop like this to which Anupama replies that she should learn to respect hard work.

Speaking of respect, Rakhi comments on how little respect Anupama’s in-laws gave to the Shah family at their housewarming.

Rakhi tries to grab attention to announce that tomorrow is Kinjal’s baby shower, but Anupama says she could have at least consulted Leela as they also need to do the preparations.

Anupama says Rakhi does not have all the power to decide over Kinjal’s baby shower but she doesn’t seem to care about the Shah family’s convenience.

Leela raises her voice at Rakhi saying that the function will happen only at their house and not Rakhi’s place but Rakhi demands that all of them come to her place.

Kinjal asks her mother to not put so much effort into this as she won’t be coming to the baby shower.

Kinjal demands that if the function is to be held, it will be held at her in-laws' place only, and her mother agrees but is not ready to change the date.

Leela and Rakhi have a fight over this and throw insults at each other, and Anupama has to intervene in between to tell both of them to compromise.

Rakhi taunts them by asking how will they organise the function if Vanraj doesn’t have a job or source of income.

Rakhi says if the money falls short, they always have the helping hand of the Kapadia family, which makes Leela upset.

She senses their shock and asks that the Kapadias must also be coming tomorrow, to which Leela replies that only Anupama, GK and Anuj are invited from their family and no one else.

Rakhi gives a sly smile and leaves the house and Hasmukh has to apologise for Leela’s behaviour.

Anupama confronts Leela about why she’s not inviting her in-laws to the baby shower to which Leela replies that her family does not deserve to be called.

She is still upset over the disrespect with which they treated the Shah family.

They have an argument and Anupama says that she will fight for her own rights and the rights of her family.