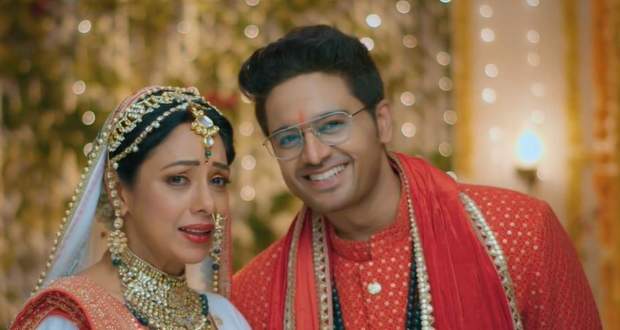 Today's Anupama 25th May 2022 episode starts with Anuj and Anupama having their post-wedding dinner and spending quality time with each other.

Later, Anuj wipes his mouth with Anupama's saree and initiates the romance.

Further, Anuj and Anupama finish the simple chores and blush while Anuj embraces his first love.

The care and affection of Anuj are reflected as he helps Anupama to take off her jewelry and leans in to smell the flowers in her hair.

Meanwhile the next day, the Shahs start their day with tea while Vanraj and Leela arrive after visiting Badi Nani.

Later, Vanraj peels almonds for Kinjal and expresses his care and affection for his daughter-in-law.

Meanwhile, at Kapadia's mansion, Anupama starts her new life as Anuj's wife with the vermillion of his name.

On the other hand, Kavya talks to Anirudh, and Leela follows her.

Later, Leela confronts Kavya for talking to her ex-husband while she is married to her son Vanraj.

Unbothered by the allegations, Kavya says she will not hide anymore and talk to her ex-husband openly.

Meanwhile, Vanraj roars at Kavya and expresses how Kavya has never let him live one day peacefully.

As usual, Kavya blasts her suppressed anger on Vanraj and says she was just controlling herself till Anupama's marriage.

On the other hand, Anupama prays for her family's happiness and well-being along with her name Anupama as she asks to keep her happiness intact.

The Vanya is on the verge of a breakup as Kavya asks for a divorce while MaAn starts their new married life.

Later, the Kapadia Mansion is filled with prosperity and positivity with Anupama's aarti while GK gets teary-eyed feeling grateful.

Meanwhile, Kavya says that she has already signed the divorce papers already and doesn't want any drama.

Later, Kavya announces that Anirudh will be arriving at the Shah house as she is no longer Vanraj's wife.

Further, Anupama starts her day in the kitchen while she thinks about how every corner is her own and adores her special connection with her kitchen.