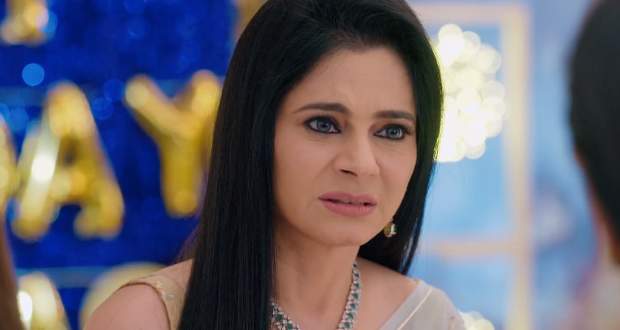 She is disappointed that Rakhi brought them there for exposing Vanraj and risked Bapuji’s life. Anupama doesn’t want to create a scene in front of anyone.

Rakhi says she is not like Anupama and reveals that Anupama knew everything and was hiding the truth.

Kinjal tries to console her but she is not ready to listen. Rakhi points out that if Anupama will get her daughter married in a family where the father has a bad character.

Sanjay takes Meenu away while Rakhi tells Baa and Bapuji about Anupama’s reason to faint. She states that Anupama fainted as she saw Kavya and Vanraj together in their room.

Anupama joins hands in front of her and asks her to not create a scene. Rakhi further reveals that Vanraj was going to spend his first night after marriage with Kavya.

She breaks the alliance of Paritosh and Kinjal and removes the ring from Kinjal’s hand. She further threatens to viral the CCTV footage of the resort if Paritosh meets Kinjal again.

Baa tries to say something but Bapuji stops her. He states they must immediately leave from there. One by one everyone leaves while Vanraj says he needs to get home.

Kavya tries to stop him but he leaves her alone. He thinks Anupama will instigate the family against him.

Meanwhile, Rakhi and Kinjal get into an argument while Rakhi clearly states she will not let her marry Paritosh. She also states that Paritosh also might follow his father’s footsteps.

Anupama cries in her resort room and fears that her family might get shattered.

© Copyright tellybest.com, 2020, 2021. All Rights Reserved. Unauthorized use and/or duplication of any material from tellybest.com without written permission is strictly prohibited.
Cached Saved on: Thursday 28th of January 2021 08:51:57 PM