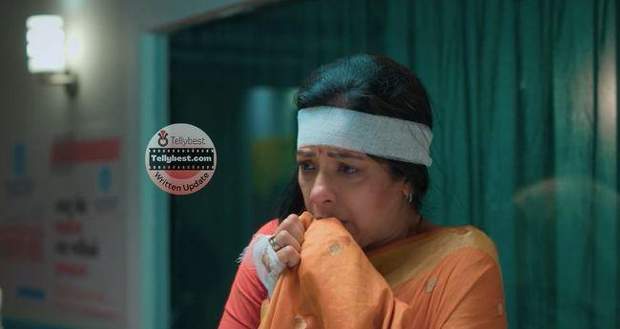 Today's Anupama 25th November 2022 episode starts with the police informing Anuj and Anupama that they are going to try everything within their boundaries to get the criminals arrested as soon as possible.

After the police warn Dimple that she might face some harsh consequences after the case starts, Nirmit seems to think about his decision over.

Meanwhile, Samar informs everyone about the news from where they get to see the condition of Anuj and Anupama.

Samar says Anupama and Anuj are fine but feel petrified on hearing about Dimple’s incident.

Leela and Vanraj express their concern for Dimple and say that no one deserves to encounter such an accident in their life.

Kinjal and Kavya point out that the safety of women is a joke because of people like that in society.

Samar feels bad for Dimple and asks God to protect her and Anuj - Anupama from every danger.

Meanwhile, Nirmit asks Dimple what he will say to his parents about the reputation of their daughter-in-law being gone.

Anupama tells Nirmit that Dimple has not lost her reputation, but those monsters have shown their origin.

However, Nirmit answers that he does not know what he will do which makes both Anupama and Anuj anxious.

Later, a parcel comes to the Shah house which turns out the AC that Pakhi ordered.

Pakhi comes and asks the delivery person to deliver it to the next house while Leela asks her to stop spending money on such luxuries.

Kavya reminds Pakhi that she spent half of Adhik’s salary on the AC which is going to crash their budget before the month ends.

Pakhi tells everyone not to mind whatever she buys as she is not doing with their money.

After Pakhi leaves, Leela says that she is afraid that Adhik is going to be fed up with Pakhi’s actions and leave her.

Adhik questions Pakhi why she spent so much money on something that does not fall in their basic needs.

Pakhi replies that she cannot sleep without AC and calms Adhik down by hugging him.

On the other hand, Anuj and Anupama bring Dimple and Nirmit to their house and find Ankush and Barkha still there.

After Barkha takes Dimple to the guest room, Ankush informs that they are looking for a house and asks Anuj and Anupama if bringing Dimple there is a good idea.

Anupama replies that people are the only ones who can help other people and as a woman, she cannot leave Dimple by herself to suffer.

Samar informs the Shahs about Anupama and Anuj bringing Dimple to their house which shocks them.

Leela says that she understands that the girl is going through so much but that does not mean that Anuj and Anupama will bring some strangers into their house.

The next day, Anuj and Anupama notice the changed behavior of Nirmit and discuss that.

Suddenly, Anupama spots Nirmit coming in front of them with a bag.