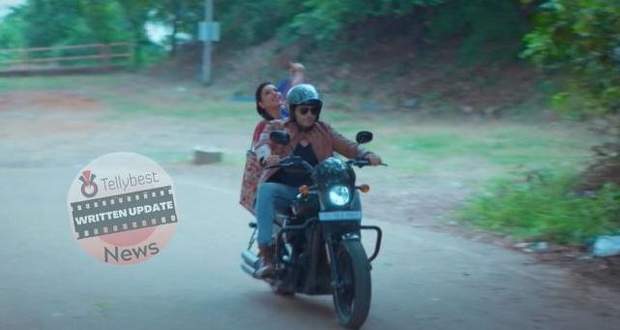 Today's Anupama 25th October 2022 episode starts with Anuj telling Anupama that he is also trying to fulfill his wish by dropping her at the college.

As Anupama asks Anuj about his wish, Anuj tells her that he always wanted to drop her at college from home and do romance in college but that wish remained a dream.

Anupama gets impressed hearing Anuj and hops on Anuj’s bike while hugging him tightly.

Anuj and Anupama vibe to a romantic song as they enjoy their bike ride throughout their way until they arrive at the college.

Meanwhile, Pakhi refuses to go to college as she is embarrassed because Anupama is studying at the same college.

Samar insults Pakhi by asking her to be proud of Anupama as she is willing to learn even after so many years.

Kavya and Leela also support Samar’s statement and ask Pakhi to continue her studies without being uselessly dramatic.

Still, Pakhi refuses to go to college even though it means that she has to miss her important lecture.

At the same time, Barkha asks Adhik why he wants to marry Pakhi and deduces that Adhik is planning to take over the Kapadia empire after marriage.

Ankush and Adhik tell Barkha that she has lost her mind while Barkha tries to emotionally blackmail Adhik which does not work.

Later, Barkha shows up in front of Vanraj and tells him that she has something important to tell him about Adhik.

Coming back to the college, Anuj decides to keep an eye on Anupama without coming in front of her.

Anupama enters the college gates with Anuj following her shortly and informing Anu that he is on duty.

After praying to Goddess Saraswati, Anupama proceeds to find her class with Anuj following her while maintaining the distance.

Anupama imagines Anuj singing a youthful tune for her on guitar and both of them dance together with the other students joining them.

Before entering the class, Anupama prays to God to look over her a bit.

As Anupama enters the class, the students mistake her for the teacher and greet her with a good morning.

Anupama sits on a bench that silences everyone and another elder woman comes as a student.

The professor enters and greets everyone as she wishes special luck to Anupama and the other older woman.

Meanwhile, Anuj gets hit on by some girls but he makes it clear that he is there to drop his wife.

© Copyright tellybest.com, 2022, 2023. All Rights Reserved. Unauthorized use and/or duplication of any material from tellybest.com without written permission is strictly prohibited.
Cached Saved on: Monday 21st of November 2022 08:22:19 AMCached Disp on: Thursday 1st of December 2022 02:31:43 AM