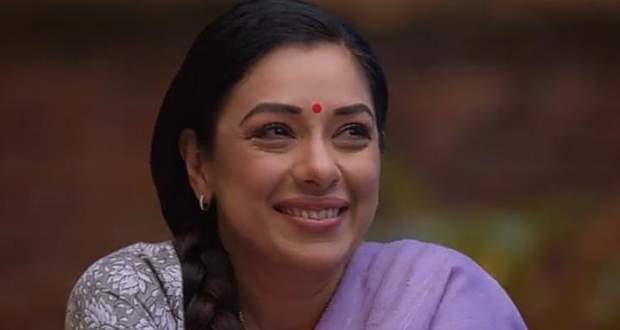 Today's Anupama 25 September 2021 episode starts with Anupama praying to God to keep everything alright while she is on the trip and taking the elder's blessings.

She is leaving while Kavya taunts her but Anupama gives back a reply and leaves which shocks everyone.

Kinjal and Samar drop Anupama till the autorickshaw and bid her goodbye while she excitedly talks of being on the plane for the first time.

Meanwhile, Anuj's car breaks down in the middle and he runs to reach the airport on time.

Anupama sees Anuj on the road and stops near him while he jokes with her and imitates her.

He sits in the rickshaw with her while she excitedly informs him that she will be on a plane for the first time.

Later, Samar informs the family that Anupama reached the airport but fell once and asks them to guess what she talked about first and Vanraj gave the correct answer with creates an awkward atmosphere as he leaves from there.

Meanwhile, Anuj and Anupama sit on the plane while a man makes fun of Anupama for not knowing how to tie the seat belt and Anuj scolds him for it.

Elsewhere, Kavya asks Vanraj why he isn't able to distance himself from Anupama and he leaves without giving a proper answer.