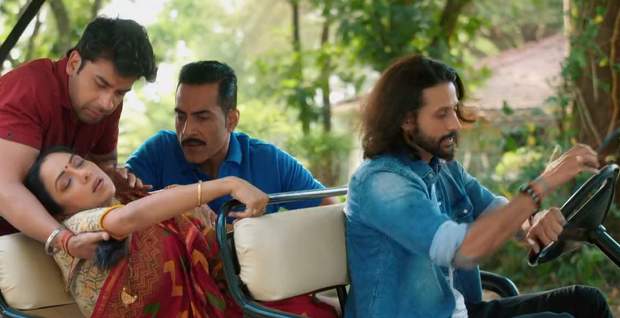 Today's Anupama 26 April 2021 episode starts with Anupama confronting Vanraj while he argues back with her.

Anupama gets emotional and pushes him.

He tells her to control herself while Anupama lashes out at him.

Vanraj looks down hearing Anupama's words and she tells him to look at her when she's speaking.

She tells him to back home but Vanraj declines and gets shocked to see Anupama unconscious.

Nandani informs Kavya that Vanraj has been found and she starts rebuking Anupama saying that she is playing games with her.

Vanraj and Paritosh take Anupama away on a cart with Advait.

Kavya decides to go there while Paritosh gets emotional on a call with Kinjal.

Advait informs Vanraj and Paritosh that Anupama is okay now.

He informs that Anupama has become overfilled with emotions and has reached her breaking point.

He makes Vanraj understand that Anupama has mental fatigue.

Vanraj says that she will stay there and will get the treatment done while Advait tells him to call over his family.

Vanraj gets tensed hearing the prices for the resort room and gives Paritosh's card for the payment.

He meets Anupama and convinces her to stay there for few days.

She questions him if he talked to Kavya and reaches for her phone but falls unconscious.

Vanraj holds her while Kavya gets shocked to see them in that position.