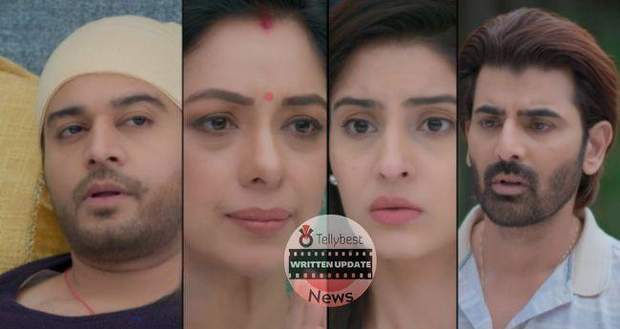 Today's Anupama 26th August 2022 episode starts with Anuj and Anupama having a romance with each other.

Anuj kisses Anupama’s cheeks and Anupama returns them when suddenly Choti comes in and closes her eyes. The couple gets shy but begins pampering Choti.

On cue, Barkha and Ankush come into the living room to talk to Anuj and Anuj look at them with disgust.

In the Shah House, hearing about an alliance from Leela, Samar gets stressed and tells her that he does not want to marry before he could say anything Leela jokingly taunts that he was ready to marry Nandini then, but not now.

On the other hand in the Kapadia mansion, Barkha and Ankush come to talk to Anuj and begins asking for his forgiveness.

Anuj yells at them and becomes stubborn that he won’t listen, suddenly his head starts aching and Anupama asks Barkha and Ankush to go away.

The doctor is called who does Anuj’s checkup while Barkha is overstressed in her room.

Ankush tries to calm her down but nothing helps. He begins blaming her tactics and thoughts for their current situation and suddenly something clicks in him.

In the Shah house, the family is having a conversation regarding the job of Kavya and Toshu and Vanraj says that he will pray for them when Kavya’s phone gets a notification and she tells him that she is selected for the job.

Kavya says things are getting better day by day when Vanraj prays things to continue to be better even for Anupama and Anuj.

Leela tells him that as long Barkha and Ankush are there nothing is peace. Toshu adds that Adhik is also very pretentious on the outside and Pakhi overhears their conversation.

Pakhi tells Adkhi about this and Adhik says that he is getting the punishment for what Barkha and Ankush did.

Pakhi tells him to still talk to the elder to which Adhik agrees.

On the other hand, Anuj asks Anupama to tell Barkha and Ankush to leave by tomorrow morning but before Anupama could tell, Barkha comes speeding into the living room and asks Anupama to see Ankush.

They rush to see Ankush in a panic attack, Barkha asks for forgiveness and tells her that they will do anything for her to stay in the house.

Anuj hears this and tells Barkha that if they are ready to do anything then they have to ask forgiveness from Anupama by kneeling and joining hands.