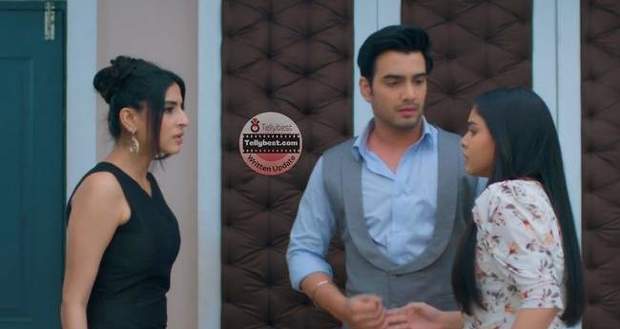 Today's Anupama 26th December 2022 episode starts with Hasmukh asking Anuj if he is having any problem and saying that he is aware that Anuj is facing something hurdling.

Anuj understands it is not of use to hide the matter from Hasmukh and says Anupama is getting pissed between the two families.

Anuj tells Hasmukh that Vanraj, Leela, Pakhi, and Toshu expect Anupama to present her life to them even though they are never thankful for that.

Explaining to Hasmukh how Anupama stresses over those matters, Anuj says that she forgets that she has another family with her own daughter.

Anuj makes it clear that Anu needs Anupama by her side at every stage in her life but is not getting her mother.

Hasmukh tells Anuj that his expectations of Anupama are not wrong and says they need to stop taking Anupama for granted.

However, Leela hears Hasmukh and Anuj’s conversation and concludes it is wrong that Anuj does not want them in his house.

Hasmukh gets shocked to see Leela packing her bags and asks her where she is going.

Leela says they will leave immediately if Anuj has so many problems from staying there.

Hasmukh informs Leela that they cannot go back to their house as Toshu is repairing the pipelines and ceiling leaks in the meantime.

Leela says they will stay in a Dharamshala but Hasmukh stops her by asking her to think how bad Anuj and Anupama would feel.

Meanwhile, Anupama practices dance while cooking along with Dimple and Samar.

Dimple says that Anupama is a Sridevi-level dancer which makes Anupama embarrassed but she says that still every person needs regular practice to sharpen their edges.

Anupama hears Pari crying and proceeds to rush to her but notices Anuj playing with Pari and Anu.

Samar and Dimple ask Anupama to join Anuj in dancing and assure her that they will manage the kitchen.

Anupama joins Anuj, Anu, and Pari and plants a kiss on both Pari and Anu’s cheeks.

Later, at the dinner table, Barkha feels irritated seeing Pakhi sitting next to Adhik while Leela gives a sour look at Dimple as she sits beside Samar.

As everyone compliments Anupama’s food, Barkha asks Anupama why she did not take help from the houseworkers in making such a huge quantity of food.

Leela asks Barkha to state clearly that she has a problem with them staying there and is trying to insult them.

Barkha makes it clear that it was not her intention and asks Leela not to judge the misinterpreted part.

Pari starts to cry but Anuj stops Anupama and asks Toshu to look after his daughter as he is her father.

Anuj and Anupama share a sweet moment with each other while dancing together and blushing through their smiles.

The next morning, Leela asks Anupama if Anuj has said something about him feeling irritated about their stay in that house.

Anupama states that Anuj does not hide his feelings behind people’s backs and asks Leela not to talk like that about him.

As Leela says that she will go away from that house once anyone says it clearly to her face, Barkha comes and asks Leela to leave.

Barkha and Leela start arguing with each other, while Anupama walks away after putting earplugs in her ears.

Later, Anupama and Anu welcome other parents with their children for joint practice.

Anuj notices Anupama getting a bit insecure about her age on seeing other young parents.