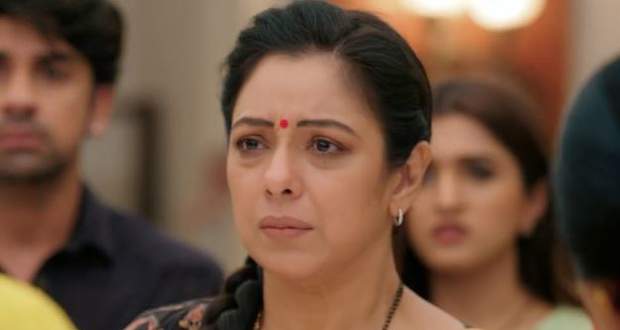 Today's Anupama 26 January 2021 episode starts with Rakhi rebuking Anupama while she asks Kinjal and Paritosh to shift to one of her flats.

Later, Anupama apologizes to Paritosh and Kinjal and asks them to think about their happiness. Meanwhile, Paritosh tells Anupama that she is being selfish as she is not thinking about the family amidst the divorce.

Simultaneously, Paritosh says to Kinjal that Rakhi is right about shifting to another flat and Kinjal disagrees with him. Meanwhile, the Shahs start arguing among them about Anupama and Vanraj's divorce.

Further, Anupama yells at them and stops, then she says that even though her decision is strange but she is ready for any further consequences. Anupama decides that she will leave the house.

On the other hand, Hasmukh stops Anupama and says to the family that no one should go against Anupama as she has the right to make her decision for divorcing Vanraj.

Elsewhere, Kavya feels sad about not bringing Vanraj's medicines and the prescription.

On the next day morning, Kavya and Paakhi are hustling to go to their office and schools. Meanwhile, Paakhi realizes that she has left her books, uniform, and bag at the Shahs' house.

Later, Paakhi makes a call to Samar while Anupama tells Samar to ask her if she has eaten or not to which Sweety says that she is still starving.

Upcoming Anupama episode update: Vanraj to be fired from his job while Anupama's dance students increase in number.