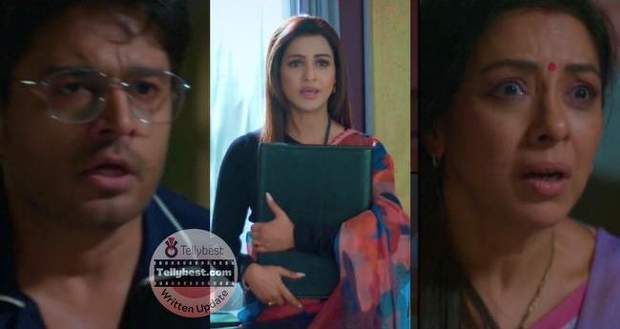 Today's Anupama 26th January 2023 episode starts with Kavya asking Mohit to come inside the room so that she can introduce everyone to him once again along with another person.

Everyone feels fascinated as they meet Maaya for the first time while Vanraj and Leela remain shocked.

Vanraj signals Leela not to say anything in front of the family members as they do not want to create a scene in front of everyone.

Kavya introduces Maaya to everyone as the event organizer who is one of the best in their field.

Maaya greets Kavya by handing her a gift and meets everyone with a smile on her face.

Meanwhile, Anuj opens the door and receives the medicines sent by the doctor leaving Anu disappointed.

Anuj and Anupama pacify Anu to sleep and wait for Maaya's arrival as they want to state things directly.

Anuj tells Anupama that he struggles to control his anger in front of Maaya as he does not get a good vibe from her.

Anuj says that Maaya does not have anything related to her past on the internet which seems very suspicious to him.

Anupama agrees with Anuj when the bell rings again and Anu wakes up saying Maaya has come.

Anuj and Anupama stop Anu from running while Dimple opens the door and informs everyone that it is the neighbor’s car.

Anu asks Anuj to call Maaya and ask her where she is but Anuj says that Maaya will arrive by the time she seems fit.

Back at Shah’s residence, Maaya and Mohit request to have a cup of masala tea and compliment Kavya for her talent in modeling.

Kavya thanks them for supporting her wholeheartedly while Vanraj glares at Kavya with angry eyes.

Maaya notices Vanraj and tells Kavya that she is proud of her as she is trying to go forward in her career even after marriage.

Leela savagely asks Maaya who is there in her family but Maaya says that she does not share her personal information that easily.

Leela says that she is not asking Maaya for some private information but for her husband and children.

Maaya and Mohit finally leave after gossiping with the Shah family while Leela says that Maaya must be visiting Anupama next.

After Maaya leaves, Vanraj says that she is a dangerous woman who will stir up big trouble in their lives soon.

Vanraj asks Kavya to stay outside with her work while Kavya questions Vanraj for not trusting her as she has no bad intentions in her heart.

Kavya tells everyone that Maaya has decided to send her to London for her modeling project and she is very excited about it.

Warning Vanraj and Leela that their cheap tricks to stop her will not work this time, Kavya makes it clear that she is not Anupama.

At the same time, Anupama and Anuj try to feed Anu but she refuses to eat anything until Maaya comes.

Anupama becomes strict and asks Anu to stop chanting Maaya’s name and eat her food as she is sick.

While everyone moves toward the kitchen to bring the soup, Anu says that she is leaving the house as everyone is scolding her.

Anu runs away from the house with Anuj, Anupama, Dimple, Barkha, and Ankush coming after her and splitting to search Anu.

Anu almost gets hit by a car but Anupama and Maaya pull her away at the same time.

Anu gets happy to see Maaya and hugs her tightly while Anupama and Anuj stand there with blank faces.