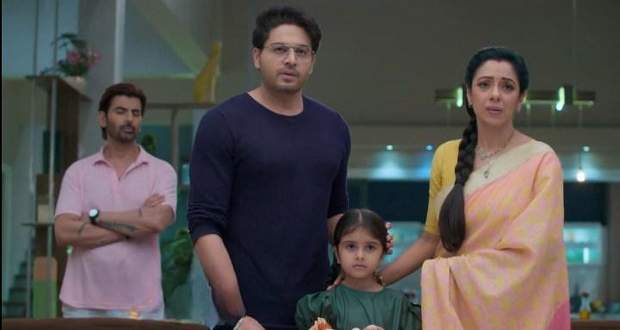 Today's Anupama 26th July 2022 episode starts with Adhik returning to the Kapadia house and informing them that he had gone to Shah's house.

Anupama worriedly asks what Vanraj said while Vanraj's shout is heard throughout the house shocking everyone.

Meanwhile, at the Shah house, Hasmukh worries about the scene that Vanraj will create at the Kapadia mansion.

Back at the Kapadia house, Vanraj accuses Anupama of luring Pakhi while Barkha and Adhik try to blame Anupama.

However, Anupama reveals that she was not the one inviting or asking Pakhi to stay back and was instead telling her to leave only.

Pakhi refuses to leave which creates an argument between the two while Anuj intervenes and tells them to go into a room and talk.

Back at the Shah house, Leela starts blaming Kavya for the drama which makes Kavya lash out and talk back to Leela pointing out that she is the one who doesn't give her the right of a daughter-in-law.

At the Kapadia house, Anupama and Vanraj get into an argument and start ridiculing each other while they both stop Barkha from intervening.

Pakhi calls out both of them as double-sided and reasons that they do not trust their parenthood.

Vanraj starts mocking Pakhi and tells her that she can stay at the Kapadia house if she wants but Shah's house won't be open for her anymore.

Pakhi takes her bag harshly and goes to hug Anupama shocking everyone.

However, Pakhi whispers to Anupama to be warned of a time when she won't be able to kick her out of the Kapadia house.

As Pakhi goes towards the main door and turns back to look at Anupama but sees Anu running to Anupama which makes her even more infuriated.

Later, at the Shah house, Leela starts berating Pakhi while Pakhi reveals that she likes Kapadia's house for the silence there.

Further, Pakhi says that Anuj is the perfect father and not Vanraj which angers him even more.