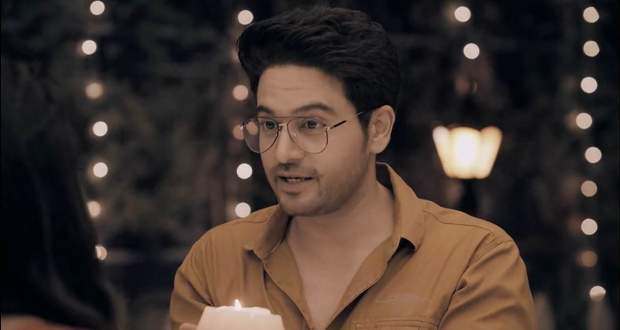 Abhimanyu and Akshara apologise to each other for hiding things from each other.

Kairav comes with the designer rings for engagement and asks both to choose their picks.

Akshara and Abhimanyu choose the same ones and get happy while looking at the rings together.

Meanwhile, the Goenka family praises Reem for the beautiful decoration of the venue as they all get ready for the engagement function.

Kairav calls Vansh about his whereabouts while he is in the taxi making him drop the rings in the car without knowing.

At the same time, Abhimanyu and Akshara meet each other at the hospital and get lost looking at each other.

Akshara acts of fainting making Abhimanyu catch her which stirs laughter in both of them.

The pair goes to meet Manjari in her room so that they can show her their getups and take her blessings for the function.

Meanwhile, Anuj and Anupama ride on that same taxi while conversing about how Hasmukh let Anupama come with Anuj to avoid arguments back at home.

Anuj gets clingy with his wish to be with Anupama instead of attending the meeting while Anupama asks him to be serious about his work.

Amid their conversation, Anupama mistakenly puts in the pouch of rings in her bag while collecting her things.

On the other hand, Manjari blesses Abhimanyu and Akshara for their happiness and asks them to smile throughout the function.

Abhimanyu and Akshara beam with laughter as Manjari names them “AbhiRa”.

Arohi decides to abandon the car at a quiet place so that no one can discover that it was her who did the accident.

Later, Anupama stops in front of the Goenka residence as the tire gets punctured while Abhimanyu and Akshara enter the venue.

Akshara and Anupama, on seeing, hug each other dearly and reminisce the time they met each other in the past.

After introducing Abhimanyu, both he and Akshara request Anupama to join the function to give them her blessings.

Anupama agrees and the three of them make a dashing entry with drums and dance.

As the function starts, Manjari talks with everyone through video call and meets Anupama for the first time.

On the other hand, Kairav and Vansh discover that the rings are missing and get perplexed thinking of the consequences.

Back at the Shah residence, Rakhi comes to that house with the excuse of taking care of Kinjal and mocks Anupama’s outing with Anuj.

The function starts with dance and music as all the family members engage in enjoying themselves including Abhimanyu, Akshara, and Anupama.

On the other hand, seeing Leela shedding tears due to Anupama’s decision, Vanraj proposes to join hands with Rakhi to drive out the thought of marriage from Anupama’s mind.