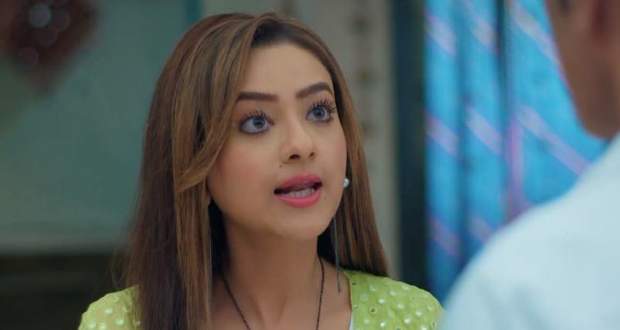 Today's Anupama 26th May 2022 episode starts with Anupama preparing wheat pudding for her first day at the Kapadia kitchen.

Meanwhile, Anupama looks for the lighter but Anuj arrives and teaches her everything about the new burner in the kitchen.

On the other hand, Vanraj takes a walk outside and releases his suppressed anger while he walks forcefully in the sun.

Meanwhile, Anupama and Anuj spend a happy time in the kitchen.

Later, Anuj notices that Anupama is missing her family while he calls Samar and Baapuji.

On the other hand, Samar and Baapuji discuss not bothering Anupama as it is her first day after marriage.

Meanwhile, Anuj requests Anupama not to babysit her and help her out in everything as he is an independent man.

Anuj suggests Anupama should find other ways to express her love and care instead of doing household chores for him tirelessly.

Later, Vanraj talks to his children and parents about how he tries his best not to get angry at little things but is tested every time.

Further, Vanraj hints that they should move on with their lives and leave Anupama alone as she must be happy in her married journey.

Meanwhile, Anupama talks about her ingrained behavior as every woman is taught the same way.

Anupama gets an intuition that something is not right at the Shah house.

On the other hand, Vanraj picks up the responsibilities of Anupama and announces it with a heavy heart.

Vanraj adds that he will play the role of Anupama and this family needs to walk without Anupama's support.

Feeling guilty for everything he has done, Vanraj stands tall for his family and is ready to take every bullet in his chest for the sake of his family.

Later, Kinjal video calls Anupama while Anupama talks to everyone in the Shah family.

On the other hand, GK and Anuj quarrel over the pudding.

Further, Vanraj warns everyone that any information about his house should not be told to Anupama.