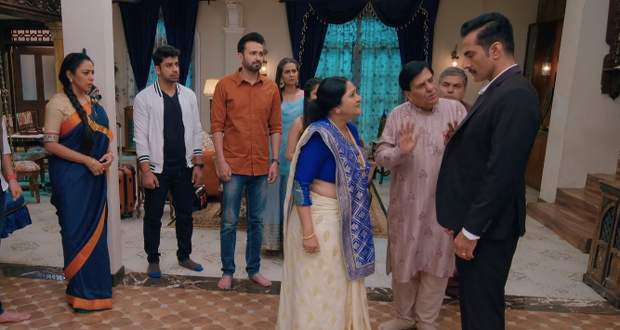 Today's Anupama 26 November 2020 episode starts with Anupama returning home along with family members. Each one of them imagines the painful words of Rakhi and get heartbroken.

Anupama thinks everyone is hungry and brings milk and fruits for them. She asks Bapuji to take the medicine while Bapuji is upset with her for hiding the truth.

He asks her why she didn’t tell them. Anupama starts crying and reveals that she was scared of their reaction.

She reveals that she was scared that they will be disheartened. Bapuji further gets shocked to learn that many of them in the family knew.

Anupama asks Bapuji to relax and doesn’t want to talk about it. Baa gets furious and wants to know the truth immediately.

Paritosh reveals that the affair is going on for 8 years while Samar and Sanjay reveal the whole truth. Bapuji and Baa get shattered while Anupama cries alone in the kitchen.

Baa comes near the door while at the same time, Vanraj arrives. Baa slaps Vanraj and feels ashamed to be his mother.

She brings him inside the house and also makes Anupama stand in front of him. She states she has always criticized Anupama and never thought she was good enough for him.

She says she thought Anupama was at fault because of her attitude. She further is disappointed that she trusted Vanraj and made him the center character of the family.

She further apologizes to Anupama for taunting her always and giving birth to a son like Vanraj. Meanwhile, Kavya is worried about Vanraj’s state.

Baa points out that he is a father of three kids and wants to know why he did it. Vanraj reveals that he did it because of Anupama.