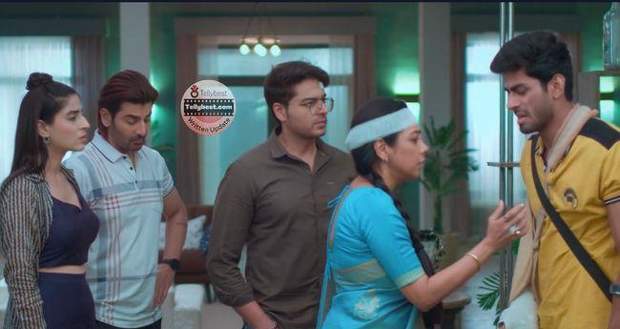 Today's Anupama 26th November 2022 episode starts with Nirmit telling Anuj and Anupama that he needs to visit home as his parents are continuously calling him.

Anupama and Anuj ask Nirmit if he is going to meet them and suggests he let his parents know about the situation.

Seeing Nirmit silent, Anupama again asks him how many days he will need to return, to which Nirmit says he will try to return.

Anuj and Anupama understand the underlying meaning of Nirmit’s words and ask him if he is abandoning his wife in such a gentle situation.

Meanwhile, Kavya and Kinjal prepare to leave for their office when Toshu appears in a suit raising questions in Leela’s mind.

Toshu says that he will be working under Kinjal from now on as she offered a job to him.

Kavya and Hasmukh get happy for Toshu but Leela objects to the husband working under his wife which is not right.

Kinjal says that she did not force Toshu into taking the job but Leela replies that fights are bound to happen due to this.

Returning to the Kapadias, Nirmit says he is not a hero like Anuj and Anupama and does not dare fight against society.

Anupama tells Nirmit that he just needs to be there by Dimple’s side while she fights against the crime committed against her.

Anuj asks Nirmit where is the love he promised to give Dimple when they married each other after running away.

Mocking Nirmit about the shallowness of the love he was talking about, Anupama asks Nirmit to prove to himself that he is eligible for Dimple’s love.

Nirmit steps back and says that he does not wish to prove anything and wants to get out of there.

As Nirmit says that he was feeling disgusted to even touch Dimple the earlier night, Anupama and Anuj widen their eyes in shock.

Anupama bursts into anger and shows Nirmit a mirror in which his lowly thoughts and perceptions seem to be crystal clear.

Meanwhile, Pakhi tells the neighbors about how her family has disowned her and is not willing to help her in running her household.

Leela gets agitated on hearing the rumors and says that Pakhi will continue to destroy their livelihood as she predicted.

Kavya receives an envelope from an anonymous person which contains the message "Do not support, else you will regret".

Nirmit starts to leave whereas Anupama asks him to think about the matter when Dimple comes and asks them to let Nirmit go.

Dimple tells Nirmit that she just expected a bit of love from his side while she faced the law with a proud head.

However, Dimple says that if there is no love between them anymore, she will not stop him from leaving as she does not want a forceful relationship.

Dimple throws away her churas at Nirmit and says that the mangalsutra has become a mere thread to her.

© Copyright tellybest.com, 2022, 2023. All Rights Reserved. Unauthorized use and/or duplication of any material from tellybest.com without written permission is strictly prohibited.
Cached Saved on: Saturday 26th of November 2022 11:28:41 PMCached Disp on: Thursday 1st of December 2022 01:10:57 PM