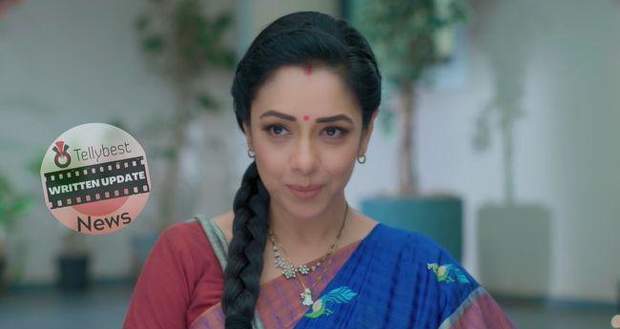 Today's Anupama 26th October 2022 episode starts with the professor asking students to start introducing themselves, and Shikha introduces herself and her husband.

Anupama applauds Shikha for quitting her job and deciding to launch her own company.

Chetan introduces himself next and says he desires to improve himself in order to address the requirements of multinational companies.

Meanwhile, Barkha is meeting with the Shahs.

Kavya, Leela, and others are astonished to discover that Barkha and Adik intended to influence Anupama through Pakhi.

Leela questions Barkha about why she is trying to expose Adhik now and Vanraj asks Barkha the same question.

Barkha claims she, too, has a daughter and realized she was about to commit something untoward with Pakhi.

Leela questions why she didn't bother to tell Anupama at least while Barkha tells that Anupama already knows the truth.

Leela, Vanraj, and the others are stunned to learn that Anupama is aware of Adhik's true identity.

Meanwhile, Parmila introduces herself to the class at college.

Anupama is encouraged to share about herself, but while trying to speak before the entire class, Anupama becomes anxious.

Anuj is waiting for Anupama outside the classroom.

Vanraj is surprised to learn that Anupama concealed the facts from them, and Leela is furious at Anupama for doing so.

Adhik is not a match made in heaven for Pakhi, according to Barkha, and she implores the Shahs to reconsider before tying Adhik and Pakhi together.

Kavya decides that they ought to interrogate Anuj and Anupama before making any decisions.

At college, the Teacher advises Anupama to remain calm and try introducing herself later while Anu calls to inquire if Anuj is worried.

On the other hand, Barkha reveals Adhik's way of life and she claims she desires to help Pakhi.

Samar interrupts them and goes on to tell Barkha that she is not protecting Pakhi, but rather trying to be not to get caught in the web of lies by revealing Adhik's past.

Barkha agrees with Samar and says she doesn't want to be held accountable.

Pakhi hears Barkha's discussion and slams Barkha for speaking out against Adhik.

Pakhi claims Adhik told her about his way of life a long time ago.

Meanwhile, Anupama reflects on her past and explains why she desires to finish her education, and thanks Anuj for always having her back.

The entire class is taken aback when they learn about Anuj Kapadia.

At the Shahs, Anuj and Anupama are supported by Kavya and Hasmukh.

They speculate that Anupama and Anuj did not want to spoil the festival while Vanraj is taken aback.

Pakhi requests that Adhik meet her or else she will likely wind up hurting herself.

Adhik is enraged at Barkha for revealing his past.

In the meantime, Anupama says she firmly believes that women must carve out time for themselves amid their obligations.

© Copyright tellybest.com, 2022, 2023. All Rights Reserved. Unauthorized use and/or duplication of any material from tellybest.com without written permission is strictly prohibited.
Cached Saved on: Monday 21st of November 2022 06:08:03 AMCached Disp on: Friday 9th of December 2022 04:10:26 AM