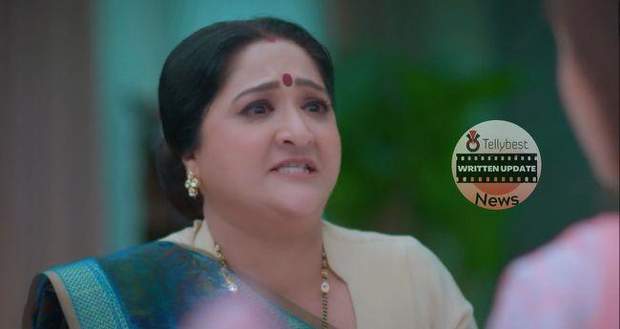 Today's Anupama 26th September 2022 episode starts with Leela crying upon arriving home and yelling that Anupama has not let Kinjal come to her house.

Samar is shocked watching something at home.

At Kapadia's house, Anuj announces going back to the office and restarting work.

Anupama understands that he is doing this to reduce his burden.

While Anupama is busy with her chores, she receives Samar's call informing her hastily about Paritosh’s news of vacating his friend’s house and his past threat of ending his life.

Anupama is tensed while Kinjal overhears her conservation which results in panic.

Anupama tries to calm her but she questions her what if Paritosh did anything wrong to himself?

Anuj inquires Ankush about the project's progress and scolds him saying he has just wasted his time planning evil with Barkha in spite of working on pending Projects.

Moreover, he asks Ankush to report to him today itself.

Ankush wishes Anuj to get busy today with some drama as usually, Shah’s drama is never ending so that Anuj can leave the office soon.

Meanwhile, Leela lashes out her worries and cries to save Paritosh by finding him or else she will die.

Anupama arrives and tries to calm the angry Leela but she misbehaves with her by throwing a glass of water which Anupama gives.

Meanwhile, they both have a heated argument accusing each other of Paritosh’s situation.

Suddenly, Vanraj and Samar come back helplessly and say that Paritosh is nowhere to be found.

Meanwhile, Barkha fills Kinjal’s ears with more tension and tries to put her anxiety saying if anything happens to Paritosh, she will be accused.

On the other hand, Anupama and others are busy calling to know about Paritosh’s whereabouts.

She calls Anuj to inform him about the situation while Vanraj fears Paritosh's life is in danger.

Anupama wanders Paritosh’s next move as she knows he can't do what others are thinking.

Kinjal cries and hugs Anuj who came back home from the office to console her.

However, Barkha gets irritated about the drama but Ankush says he wishes for this as he wants some time to cover his work’s mistakes.

At the same time, Paritosh enters Kapadia’s house and makes toys rattle to calm Arya and questions if she will ever forgive him.

Kinjal looks with confused eyes but Paritosh expresses his disappointment as she has not picked up his single call.

Anuj does not allow Paritosh to enter his house till Kinjal says.

Paritosh cries and asks Kinjal to either beat him but let her meet Arya a single time.

Anuj asks if he is drunk as his legs are not in balance to walk firmly and he says that he is a little drunk.

Paritosh insists Kinjal to come with him and gradually comes inside despite denying him to enter.

He carries Arya in his hands but due to alcohol, he misses his balance, ending up falling to fall Arya.

Kinjal handles her shouting if he is mad while he threatens her by placing a knife to kill himself.

At the same time, Anupama enters and asks Paritosh to kill himself, making everyone go shocked.