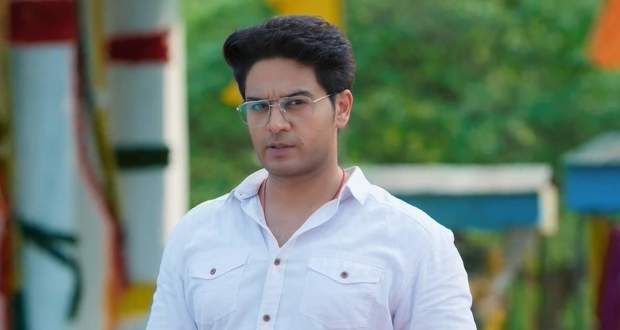 Today's Anupama 27th April 2022 episode starts with Anuj telling Anupama that he will kiss her and again in front of everybody if his heart asks him to do so.

Suddenly, Anupama takes Anuj’s hands and gently kisses them saying that she has the courage to only kiss him in discrete.

Anuj remains frozen in his spot with surprise while Anupama runs away in embarrassment.

Meanwhile, Samar gives Hasmukh his medicines and goes to attend a call when suddenly Hasmukh starts to feel dizzy.

Clenching his heart in pain, Hasmukh falls to the floor whereas other family members continue to do their respective works unaware of his condition.

Hasmukh faints on the floor in an attempt to get a hold of his medicines and wakes up by himself after a few minutes.

However, in between, he imagines that his condition has been discovered by the family members and Vanraj blames Anupama for all of that.

Vanraj announces that Anupama’s wedding will not take place from the Shah house which infuriates Hasmukh.

Just then, Hasnmukh’s eyes open and he releases a sigh of relief as it was all his imagination.

On the other hand, Anuj returns to his house and lifts up the mood of Devika, Malvika, and GK and begins to joke and enjoy with them.

Vanraj enters the house and spots Hasmukh sprinkling water on his face and checks upon him.

Hasmukh decides to go to the doctor by himself in secret as he cannot let Anupama’s wedding be affected by his health.

On his way, Hasmukh encounters Anupama and tries to act positively in front of her but Anupama detects something is off.

However, Hasmukh covers up the void of suspicion through some excuses and leaves to see the doctor after praying to the god to let him healthily do the kanyadaan of Anupama.