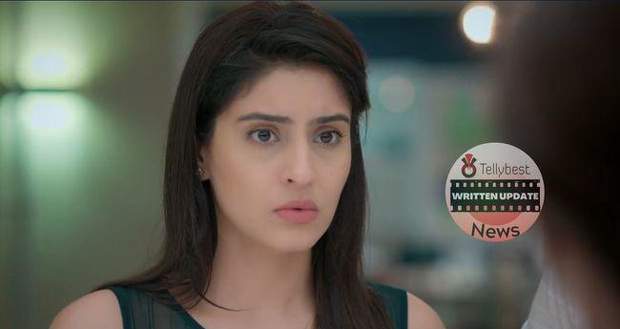 Anupama readily makes them get up, they ask Anuj if they are allowed to stay in the house now.

Anuj announces that they still have one more thing to do.

Meanwhile, Pakhi asks Adhik what were his plans for the two of them when he was to stay here and Adhik takes out two rings from his pocket.

He proposes Pakhi to marry him and Pakhi agrees while Adhik hugs her.

In the Shah mansion, Leela is busy finding an alliance for Samar and starts appreciating her current daughters-in-law.

During this Leela sees Barkha and Ankush standing at their door and everyone gets shocked at seeing them.

Vanraj asks the duo at the door for an explanation and they apologize to him by joining hands about their previous actions, therefore he deciphers that Anuj has sent them and the duo gets reluctant and instead says they came by themselves.

Vanraj tells them that he does not forgive them and wants to sever the ties with all three, even Adhik.

On hearing this, Pakhi begins worrying when she sees Vanraj hates Adhik along with Barkha and Ankush.

While Barkha and Ankush get in their car Ankush blames Barkha for all the insults and Barkha retorts that she was doing it for them.

Later, she asks about Adhik and Ankush says Adhik does not tell him anything anymore.

On the other hand, Anupama is stressed about the ‘Kalesh’ Barkha and Ankush would do in the Shah house and asks Anuj why he sent them there.

Anuj explains that if they would have punished them this time then Anuj and Anupama will have to bear the other consequences.

He further tells that, Barkha and Ankush can stay only for as long as they don’t make other arrangements but he does not want to keep ties with them anymore.

Anupama calls Choti for Anuj’s happiness and they decide to play badminton. She hands the racket to Anuj but as Choti is about to serve the shuttle, Anuj gets a paralysis attack and his hands stop working.

The racket falls off Anuj’s hand and Anupama tries to calm his panic. She motivates him to focus since he is her hero and can do it and also tells him to take a deep breath and grip it.

Finally, after Anupama’s efforts, he can grip the racket and thanks Anupama for being there for him.

He plays badminton and gets extremely overwhelmed and hugs his wife and daughter.

Barkha and Ankush arrive and watch the happy trio hugging together and having a moment in jealousy.