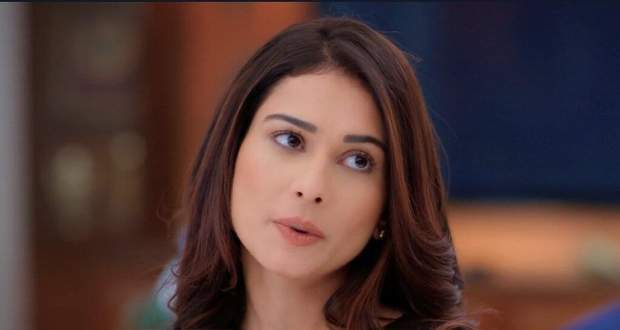 Today's Anupama 27 December 2021 episode starts with Anupama asking Anuj if the argument between him and Malvika was due to her.
Anuj denies that and tells Anupama that he loves her as equal as Malvika and considers both of them equal in his life.
He tells Anupama not to think like that and go away from him thinking that she is coming in between him and Malvika.
Anupama blushes after hearing Anuj confess his love again for her.
She explains that Malvika is like a child who just wants her brother’s full attention for herself.
Meanwhile, the whole family gathers to see Malvika and Vanraj discussing work and gets surprised to see Malvika’s professional side.
Nandini expresses her concern to Samar regarding Malvika and Vanraj to which Samar gets a bit angry and tells her she is overthinking like Kavya.
Vanraj and Malvika suddenly start arguing on the menu and Malvika decides to play a dice game to decide the winner. The one with the higher number on dice will win.
Vanraj agrees and both play the game in which Malvika loses to Vanraj.
She immediately transfers 50 Lakhs to the company’s account and asks Vanraj to start the work according to his demands shocking the family members.
Vanraj and Malvika clear their confusion by telling them that they always work like that.
At the same time, they offer Toshu a job at Vanika Teamworks, making the family members happy.
On the other hand, Anuj shows Anupama some decorating things that he has brought for Malvika’s new cabin and expresses his concern about Malvika choosing Vanraj as her partner.
Anupama questions Anuj if he doesn’t like Malvika partnering with Vanraj making him go silent.

© Copyright tellybest.com, 2020, 2021. All Rights Reserved. Unauthorized use and/or duplication of any material from tellybest.com without written permission is strictly prohibited.
Cached Saved on: Thursday 20th of January 2022 02:25:04 PMCached Disp on: Friday 21st of January 2022 04:35:53 PM